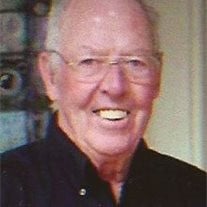 MINERAL POINT – Ralph George Pittz, age 74, of Mineral Point, passed away suddenly on Thursday, January 19, 2012 at his life-long home. He was born on May 30, 1937, in Dodgeville, son of Aloys & Kathryn (Palzkill) Pittz. He graduated from Mineral Point High School in 1955, and graduated from UW-Short Course. In his early years, he liked playing softball, snowmobiling, attending card club and going on escapades with his many good friends. He married (Mary) Janice Schmitz on a really hot day July 5, 1958. After marriage they continued a long-standing family farming tradition and purchased the family farm. Together, they raised 8 children that were all blessed with Ralph's smile. They owned and operated the J & R Bar for 12 ½ years, making it into a bar/restaurant where folks felt comfortable bringing their families for the Wednesday night chicken special or the Friday night fish fry. In 1977 they purchased and ran the Dodge Point Country Club with his lifelong friend and business partner Bruno Galle. It was 18 years of fun memories until they retired in 1995. In 2009 his farm was recognized as a Century Farm at the Wisconsin State Fair, where he and his sisters accepted the award on behalf of the Palzkill / Pittz family. When Ralph wasn't busy doing other things he loved making the rounds in the morning to play cards. You could find him almost daily attending his grandkids wrestling matches, basketball games, baseball games, and even (sometimes reluctantly) the choir and band activities. He also enjoyed watching golf tournaments, Badger sports, the Packers, The Price is Right and Lawrence Welk re-runs on TV. Ralph was an active member of St Mary's Catholic Church where he served on the church board for two terms and worked his fair share of pasty fundraisers. He was a member of the Knights of Columbus, the Wisconsin Tavern League, and an inductee into the Dodge-Point Hall of Fame. He was a member of the Iowa County Fair Board Association, helping to establish the Winter Carnival. He was also a proud blood donor being a member of the 12 gallon club, and he upon his death, gave a final donation of his tissues. Ralph is survived by his wife of 54 years, Janice; his children Tony (Lori) Pittz, Tim (Cindy) Pittz, Troy (Teresa) Pittz, Ted (Tina) Pittz, Tari (David) Engels all of Mineral Point, Torrie (Jeff) Zink, Sherrills Ford, NC; Trisha (Chris) Cox, Belleville, WI; Tracie (Cody) Cook, Cottage Grove, WI, as well as his 18 grandchildren and Number 1 Granddog, Lambeau. Also surviving him are his brothers and sisters: Alice Pittz, OP, Betty Radtke, Marion O'Brien and Ray Pittz, as well as in-laws Joe (Marlene) Schmitz, Bill (Barb) Schmitz, John (Mary) Schmitz, and Curly (Helen) Schmitz and many nieces, nephews and friends. Ralph was preceded in death by his parents, stepmother Lorna, mother-in-law Margaret Schmitz, brothers-in-laws Harold, Kenneth, Don & Bernie Schmitz, Dick O'Brien and Bill Radtke, and sisters-in-law Kathleen Nicholson and Marilyn Pittz. A Mass of Christian Burial will be celebrated on Monday, January 23, 2012 at Ss. MARY & PAUL CATHOLIC CHURCH in Mineral Point. Father James Hinnen will officiate. Burial will be held in St. Mary's Cemetery. Friends may call from 2:00 p.m. until 6:00 p.m. on Sunday and from 10:00 a.m. until time of Mass on Monday at Ss. MARY & PAUL CATHOLIC CHURCH in Mineral Point. Ralph got his wish of living his entire life on the family farm and passing quickly. He showed his family that you can play hard as long as you work hard. He taught by example, and tried to give everyone their fair shake. He will be greatly missed by all who knew him.

The family of Ralph G. Pittz created this Life Tributes page to make it easy to share your memories.

Send flowers to the Pittz family.