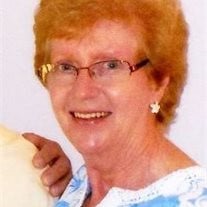 Mineral Point - Rachel Jean Humbert, of Mineral Point, passed away on October 20, 2012 after a short courageous battle with cancer. Rachel was born on March 7, 1939, in Dodgeville, Wisconsin to Robert and Ruth (Weir) Edge. She lived in Illinois and Iowa before finally settling in Wisconsin. On August 24, 1956 she married Robert (Bob) Powell at the Little Brown Church in Nashua, Iowa. Together they raised six children. Rachel and Bob lived in Mineral Point together for over 50 years until his passing in 2009. Rachel drove a bus for the Mineral Point School District and then went on to work for Lands' End for 25 years. Rachel was a member of the Mineral Point United Methodist Church and their Mary Circle Group. She was a volunteer for the American Red Cross. In February 2011 Rachel married Dr. Paul Humbert and together they settled in both Mineral Point and Panama City Florida. They enjoyed their time together traveling to Ireland (Rachel was extremely proud of her Irish heritage), New Zealand, and Australia. Words cannot describe our Mother, Friend and Grandmother. Her family was her greatest joy and she cherished time spent with them. She always had a smile and a kind word for everyone and was always there with help to whoever needed it. Over her lifetime she acquired more friendships than we can count, it was her greatest talent. Rachel is survived by her husband Dr. Paul Humbert; her children, Christa (Fred) Neff, Kay (Jerry) Schaaf, Robert (Patricia) Powell, Pamela (Charlie) Garnett, Timothy Powell, Brian (Jonna) Powell; her stepsons, Brent and Eric (Julie) Humbert; her grandchildren, Lena Neff, Andrea (Mark) Finley, Jennifer (Chad) Novak, Christopher Powell, Brian (Fiance Erin Frank), Colin and Rachel Garnett, Taylor, Erin, Nathan and Garret Powell, Elizabeth (Andy) Angland; her great grandchildren, Natalie and Grady Finley and Tatum, Layla and Dayne Novak; her sisters, Janet (Dale) Fenley and Ruth Ann (Robert) Swint; as well as the wonderful and supportive Powell family and the Jack and Laura May family. Funeral services will be held on Thursday, October 25, 2012 at 11:00 a.m. at the First United Methodist Church in Mineral Point. Pastor Leanne Rose will officiate. Burial will be in Graceland Cemetery. A visitation will be held on Wednesday, October 24 from 4:00 until 8:00 p.m. and also on Thursday from 10:00 until 11:00 a.m. at the First United Methodist Church. Memorials may be sent to the First United Methodist Church or the Mineral Point Public Library. Many thanks to the Doctors and Staff at Saint Mary's Hospital, Upland Hills Hospice and the Mineral Point Care Center for their kindness and support.

Mineral Point - Rachel Jean Humbert, of Mineral Point, passed away on October 20, 2012 after a short courageous battle with cancer. Rachel was born on March 7, 1939, in Dodgeville, Wisconsin to Robert and Ruth (Weir) Edge. She lived in Illinois... View Obituary & Service Information

The family of Rachel Jean Humbert created this Life Tributes page to make it easy to share your memories.

Send flowers to the Humbert family.