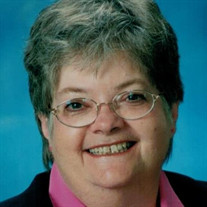 Cobb – Phyllis Ann Fritsch, age 77, of Cobb, born April 20, 1942 died on August 14, 2019 at Upland Hills Health Nursing and Rehabilitation center due to pancreatic cancer. Phyllis was the oldest daughter of Burral and Freda (Davies) Jones and graduated salutatorian from Ridgeway high school. After high school Phyllis worked for the State of WI for a year in Madison. Phyllis’s career in the medical field started in the Hollandale clinic doing medical records and transcription for Dr. Marshall. While working there she met and married Arnold Fritsch in 1963. From there they moved to Edgerton and worked for the Edgerton hospital where Paul was born. She was instrumental in starting the first EKG program at the Edgerton hospital. They moved to Beloit where Wayne was born and Phyllis again did transcription work for the Beloit hospital. While living in Ridgeway, Phyllis was a Dodgeville General Hospital Board member for 5 years and also active on the board for the 1974 merger between Dodgeville General and Dodgeville St. Joseph’s Hospitals into the Memorial Hospital of Iowa County (MHIC). She remained on the MHIC board for another 5 years. Phyllis and family moved to Cobb and was also the Cobb Village Health Officer in the late 70’s. In 1979 Phyllis started her career with MHIC and later Upland Hills Health as Director of Medical Records (later Health Information Management) and held several other titles including Director of Community Relations, Medical Staff Director, Librarian, Quality Improvements Co-Director, Director of Information Systems, Administrator, and President/CEO for the last 9 years before retiring in 2013. During her 34 years with the hospital, Phyllis was directly involved with several building programs and expansions, clinic purchases, and the recruitment of many new physicians and other medical professionals to bring expanded healthcare services to the people of Iowa County. Phyllis started the first work from home program in the state to find needed medical transcriptionists and coders for the hospital which later expanded to other rural areas. Phyllis understood the importance of educating community members on how their generosity could help strengthen local healthcare. In 2002 Phyllis and several volunteer board members organized the Upland Hills Health Foundation which raised $1 million in five years and continues raising funds for equipment and special projects. As a graduate of the Wisconsin Rural Leadership Program, Phyllis was one of the first groups of westerners to travel to China after the 1989 Tiananmen Square uprising. Phyllis was also a member of the National Advisory Committee on Rural Health reporting to the U. S. Health and Human Services Secretary Kathleen Sebelius in the Obama administration to raise awareness and focus on rural health issues around the country including Iowa County, WI. Phyllis was also involved in the Rural Wisconsin Health Cooperative and Wisconsin Hospital Association working through the mental health services, diabetes, and heart disease crises in rural Wisconsin. Phyllis also was a chair and founding member of the Iowa County Area Economic Development Corporation, and after retiring from UHH, she worked as the City of Dodgeville Economic Specialist for nearly two years. Phyllis was often volunteering and even leading numerous community groups which included UHH Hospital Auxiliary (life member), UHH Foundation, Iowa County Cancer Coalition(founding member), Iowa County Area Economic Development Corporation, Advisory Council for Wisconsin Physicians Service, Blackhawk Council of Girl Scouts, Thrive (Regional Economic Development) Healthcare Council, and many others. Outside of her professional career, spending time with family including her grandchildren and great-grandchildren, staying connected with friends, gardening, scrapbooking, and quilting were extremely important for Phyllis. She created scrapbooks and quilts for everyone in her family. Above all, Phyllis’ connection to God and her Church was the highest importance in her life. She served as church organist much of her life and as a church board member and Sunday School teacher. Phyllis’ faith in God and prayer life is what she relied on and trusted in for daily living as well as every difficult situation and major decision. Everyone who knew her will miss her faith connection and loving, grace-filled example. Phyllis has joined her parents in heaven and leaves behind her husband Arnold of 56 years; sons Paul (Jim Hartman) and Wayne (Jessie); grandchildren Paige (Luke) Kramer, Bethany (Bruce) Hart, Karissa Fritsch, Margo Fritsch, and Ryan Fritsch; great-grandchildren Aubriella Hart, Jaxon and Julia Kramer; sisters Mary Claire Jones and Beth Jones (Jack Engelke). Funeral services for Phyllis Fritsch will be held at 11:00 a.m. on Monday, August 19, 2019 at the EDMUND EVANGELICAL FREE CHURCH. Pastor Douglas Tremelling will officiate. Burial will be held in Calvary Cemetery in Cobb. Friends may call from 2:00 p.m. until 6:00 p.m. on Sunday at the GORGEN-McGINLEY & AYERS FUNERAL HOME in Dodgeville and from 10:00 a.m. until time of services on Monday at the church. In lieu of flowers, memorials to Upland Hills Health Foundation or Iowa County Cancer Coalition are encouraged. Psalm 148 1 Praise the Lord. Praise the Lord from the heavens; praise him in the heights above. 2 Praise him, all his angels; praise him, all his heavenly hosts. 3 Praise him, sun and moon; praise him, all you shining stars. 4 Praise him, you highest heavens and you waters above the skies. 5 Let them praise the name of the Lord, for at his command they were created, 6 and he established them for ever and ever— he issued a decree that will never pass away. 7 Praise the Lord from the earth, you great sea creatures and all ocean depths, 8 lightning and hail, snow and clouds, stormy winds that do his bidding, 9 you mountains and all hills, fruit trees and all cedars, 10 wild animals and all cattle, small creatures and flying birds, 11 kings of the earth and all nations, you princes and all rulers on earth, 12 young men and women, old men and children. 13 Let them praise the name of the Lord, for his name alone is exalted; his splendor is above the earth and the heavens.

The family of Phyllis A. Fritsch created this Life Tributes page to make it easy to share your memories.

Send flowers to the Fritsch family.