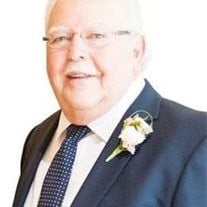 Mineral Point - Philip Edmund "Phil" Crawford, 74, of Mineral Point, died with his wife and children at his side and went into Godʼs eternity on Thursday, April 21, 2016, after a battle with cancer. A celebration of life service is being planned at the CONGREGATIONAL UNITED CHURCH OF CHRIST, Mineral Point, Wisconsin 3:30 p.m. on Thursday April 28, 2016. A visitation is scheduled from 1:00 p.m. until 3 p.m. on Thursday at the church, with the celebration of life following at 3:30. Philʼs guest book is provided in the link to Gorgen Funeral Home. In lieu of flowers, memorials may be offered to Upland Hills Health, Mineral Point Public Library or the Congregational United Church of Christ in Mineral Point. Phil was born on April 22, 1941, in Monticello, Wisconsin, to Sherman and Hannah (Whaley) Crawford. He graduated from Monroe High School in 1959 and enlisted in the National Guard in 1961, and served his country in the Army during the Cold War, a time that included the Cuban Missile Crisis and the construction of the Berlin Wall. For five and half years he continued with the National Guard. He was employed with Wisconsin Power & Light, Co. in Janesville, WI. Always a hard worker, he began with WP&L as a semi-skilled laborer and ascended to management positions including district manager of Lake Geneva, Beloit, and Mineral Point, and director of customer service for the western territory. He retired from the utility after more than thirty years of dedicated service. After retirement from WP&L, which by then had become Alliant Energy, Phil began working in customer service at Landsʼ End in Dodgeville and continued there for fifteen years. Phil married Karen Lueck of Browntown in 1963, and they have been happily married ever since. They celebrated their fiftieth wedding anniversary in 2013 surrounded by friends and family. Phil and Karen had three wonderful, talented children whom Phil loved dearly: Kersten (Kyle) Foster, of Wilmington, North Carolina; Heather (Dave Schomisch) Schimmers, of Appleton; and Neal (Sarah) Crawford, of Eau Claire. During Philʼs career with WP&L, the family moved often and lived in places such as Janesville, Berlin, DeForest, Oregon, Sheboygan, Platteville, Lake Geneva, and Mineral Point. Phil and Karen ultimately settled in Mineral Point and have lived there for many years. Their lovely home is filled with happy memories of birthdays, holidays, graduations, and parties, and it includes many treasured pictures of their children, grandchildren, friends, animals, and travels. Phil had nine grandchildren whom he absolutely adored: Kersten and Kyleʼs children including Ethan, 17, who loves the outdoors and will always be Philʼs number one grandchild; Dylan, 15, who is a world-class skateboarder and good guy; and Skylar, 12, who is mature beyond her years with a great spirit. Heather and Daveʼs children including Eiley, 16, who is a gorgeous girl with a natural ability for sports; Parker, 15, who is a brainiac and the best soccer player ever; Sam, 13, who is super smart with the kindest heart; and Kal, 12, the most handsome boy with the most loving heart. And finally, Neal and Sarahʼs children including Lucia, 10, who feels things more deeply than most adults; and Anna, 8, a mini-me of Neal with the sharpest wit. In addition to being devoted to his family and a hard worker, Phil was a valuable member of the community. He served in civic roles including being a member of the President of the Retiree group for WP&L/Alliant,Jaycees, Kiwanis, Masons, the Garden Club, the Mineral Point City Council, and the Pendarvis Save our Site Committee. He was on the boards of the Memorial Hospital of Iowa County, the Upland Hills Health Foundation, the Mineral Point Chamber of Commerce, and the Iowa County Planning Commission. He also served as treasurer of the Iowa County Fair Board of Directors. Philʼs family remembers him as a loving husband, father, and grandfather who fought bravely during his illness with cancer. As was his nature, rather than being concerned with himself, he was more concerned about his family. They will forever treasure his guidance in their lives and his witticisms, which include his unique perspective about life, parenting, and relationships. He enjoyed laughter, spending time with his family, and Brandy Manhattans; he will be missed. Phil was preceded in death by his parents, Sherman and Hannah, his brothers Robert and Sherman Crawford, his sister Phyllis Kernen, his brothers-in-law Don Van Wagenen and Clarence Kernan, his sister-in-law Millie Crawford, his mother and father-in-law Marie and Howard Lueck. The family would like to thank everyone for their cards, telephone calls, meals, kind words, and stories about Phil. Special thanks to Carey and Beth from Agrace Hospice for their compassionate care. Philip Edmund Crawford was a wonderful man who is loved and will be remembered always by his family and friends. "I see skies of blue, And clouds of white. The bright blessed day, The dark sacred night. And I think to myself, What a wonderful world."

Mineral Point - Philip Edmund "Phil" Crawford, 74, of Mineral Point, died with his wife and children at his side and went into God&#700;s eternity on Thursday, April 21, 2016, after a battle with cancer. A celebration of life service is being... View Obituary & Service Information

The family of Philip E. Crawford created this Life Tributes page to make it easy to share your memories.