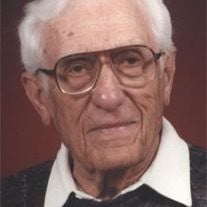 Dodgeville – Paul F. "Rags" Radtke, age 98, died on Tuesday, June 26, 2012 at Crest Ridge Assisted Living in Dodgeville. He was born on October 1, 1913 in Appleton, Wisconsin, a son of Charles and Mary (Nienhaus) Radtke. Paul graduated from Appleton High School in 1931. He was an employee of the JC Penney Stores in Appleton and Beaver Dam. Paul married Margaret Laus, from Menasha, on May 26, 1941. He served in the U.S. Air Force during World War II and served 29 months in the South Pacific with the 100th Service Squadron. A daughter, Mary Paula was born on September 5, 1951 in Beaver Dam. In February, 1955, he moved to Dodgeville and Paul and Margaret owned the Skogmo Clothing Store for 21 years, retiring in 1976. He served on the Dodgeville Library Board, the Hodan Center Board and several committees at St. Joseph Catholic Church, where he helped many 1st graders at St. Joseph School. Paul enjoyed golf, cards, word games and his 57 years of married life with Margaret. Like many families, tragedy struck Paul's and Margaret's life, when just before Mary Paula's senior year in high school, she was killed in car accident, leaving an emptiness in their family. Paul is survived by his sisters, Marion Schmidt, of Appleton and Ann Milanowski, of Wausau; his special "daughter", Julie Weiskircher, of Dodgeville; several nieces, nephews, cousins and friends. He was preceded in death by his wife, Margaret, in 1998, his daughter, Mary Paula Radtke, in 1970, his sister, Elizabeth Radtke, in 1995 and his parents. A Mass of Christian Burial will be celebrated at 11:00 a.m. on Friday, July 6, 2012 at ST. JOSEPH'S CATHOLIC CHURCH in Dodgeville. Father Patrick Wendler will officiate. Burial will be held in St. Joseph's Cemetery, with Military Graveside Rites accorded by the Dodgeville Area Veterans. Friends may call from 9:30 a.m. until time of Mass on Friday at the church. In lieu of flowers, memorials be can be made to St. Joseph's School Trust Fund.

The family of Paul F. "Rags" Radtke created this Life Tributes page to make it easy to share your memories.