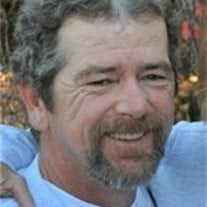 Mineral Point - Paul F. Hildreth, age 56 of Mineral Point, Wi died peacefully at his home on Friday, May 19, 2017. Paul was born on April 22, 1961 to the loving George and Joan Hildreth who preceded him in death. Paul is survived by his beloved wife Linda Merkes who was the love of his life since 1982 and two loving children Tiffany and Paul (Carissa) who he would drop everything just to help them if they needed. Paul also is survived by his four beautiful grandchildren Liam, Iridessa, Paislee, and Gionni who he loved more than life itself which was evident by his smile when they entered the room. Paul loved doing things like camping, sporting events, and just spending time with his brothers Rod (Donata), Mike (Beth), and George, Jr. (Berta) and his sister Barb. Paul had another brother he loved dearly, Keith, who preceded him in death. Paul also enjoyed spending time with his many nieces and nephews and long life best friend John Schmit (Schmity). Paul was a simple man if you knew him you loved him, he enjoyed sharing his love of music with his neighbors (or loud music so the neighbors could hear it), dancing and singing, a cold beer, cigarettes, garage sales, and most importantly his family and friends. We will forever remember him and miss his kind and mild mannered ways and how he always welcomed you with "nice day, huh?" Rest in peace Paul, Rock On! Paul's loving grandparents Liz, Howard, Henrietta, and Francis all preceded him death as well as many aunts and uncles, his mother and father in-law and brother and sister-in-law. Paul also was preceded in death by his dog Wags who he loved to take long walks with. A Celebration of Paul's Life will be held from 1-4 on Saturday, May 27, 2017 at the GORGEN FUNERAL HOME in Mineral Point. A Time to share Paul's memories will follow at his home.

Mineral Point - Paul F. Hildreth, age 56 of Mineral Point, Wi died peacefully at his home on Friday, May 19, 2017. Paul was born on April 22, 1961 to the loving George and Joan Hildreth who preceded him in death. Paul is survived by his beloved... View Obituary & Service Information

The family of Paul F. Hildreth created this Life Tributes page to make it easy to share your memories.

Send flowers to the Hildreth family.