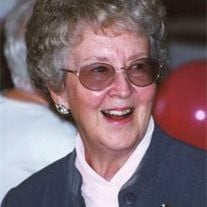 Dodgeville - Patricia M. Rock, age 92, of Dodgeville, passed away peacefully at Upland Hills Nursing and Rehabilitation Center on Friday, June 14, 2013. Pat was born in Highland, WI to Herman and Mary Pierick on March 17, 1921. She graduated as valedictorian of the class of 1939 Highland High School and continued her education at Edgewood College where she earned a liberal arts degree. On October 9, 1941, she and Bob Rock became husband and wife at St. Phillips Catholic Church in Highland. Bob and Pat created their life together in Dodgeville shortly after Bob's return from service in WWII. Pat was a devout Catholic and a devoted wife and mother. She was a member of St. Joseph Catholic Church where she directed the choir until 1982. At that time, she became a church organist until 2009. She was dedicated to her husband and provided a loving home for her children. Her life was rich and full and she shared her blessings and gifts freely with all those who were part of her life. She could make any meal a feast and every day extremely special. When Bob retired, they wintered in Arizona where they enjoyed their days hiking and biking together, antiquing and entertaining. Pat is survived by her sister Leone Dalles of Dodgeville; her children - Sr. Bernardone, FSE of Meriden, CT; Bob of Madison; Marianne (Duane) McCrary of Madison, JoAnne of Verona, Bernard (Siri) of Tampa, FL, Trish of Dodgeville; 9 grandchildren; and 13 great grandchildren. She is preceded in death by her husband Bob, her parents, her brothers Marion, Virgil, John, Bill, Wilfred, Fr. Bernard and her sister Bernadette. A Mass of Christian Burial will be celebrated at 11:00 a.m. on Tuesday, June 18, 2013 at ST. JOSEPH CATHOLIC CHURCH in Dodgeville. Father Patrick Wendler will officiate. Burial will be held in St. Joseph Cemetery. Friends may call from 6:00 until 8:00 p.m. on Monday at the GORGEN-McGINLEY & AYERS FUNERAL HOME in Dodgeville and from 10:00 a.m. until time of Mass on Tuesday at the church. We wish to express our appreciation to Dr. Grieshaber and his staff, Aunt Peg Rock, Father Pat, Hospice, Upland Hills Nursing and Rehabilitation Center, Sienna Crest, Mary Jo Clerkin, Linda Schoenmann and all who were involved in Mom's care over the past few years. Life is eternal, and love is immortal, and death is only a horizon; and a horizon is nothing but the limit of our sight.

The family of Patricia M. Rock created this Life Tributes page to make it easy to share your memories.