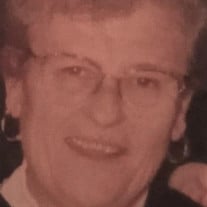 Ridgeway – Patricia A. “Pat” Pailing, age 83, of Ridgeway, passed away on Friday, January 15, 2021 at Crest Ridge after a brief illness. Pat was born on July 16, 1937 in Ridgeway, the second of six children to Clarence and Rosalia (Dunbar) Harrington. Pat graduated from Ridgeway High School Class of 1955. Pat was united in marriage to Robert (Bob) Jones in June 1959. She and Bob were blessed with one son Tim. Bob preceded her in death in April 1961. Pat and Tim moved to Arena, where Pat met and married Francis Pailing in May 1966. They were blessed with an additional four children, Peggy, Patti, Pam and Thomas to round out their clan. They farmed on the family farm on Blue Ridge Road. Farming was Pat’s life. Francis preceded her in death in April 1978. After Francis’ passing, Pat worked off the farm at Greenway Manor and eventually retiring from Bloomfield Manor. Not one to sit idle and with all her grandchildren in school, she went back to work at Lands’ End for another ten years. Pat is preceded in death by her husbands Robert and Francis, her sons Tim and Thomas Pailing and her brother Joe Harrington. Pat is survived by her daughters Peggy (David) Augustine, Patti (Scott) Williams and Pam (Larry) Liegel; 13 grandchildren Julie (Ben) Luedtke, Krista (Scott) Mayne, Bill, Mike, Faith and Jorja Pailing, Rebecca (Zak), Erin and Randy Augustine, Halley and Heidi Williams and Rachel (Darien) and Ava Liegel; six great grandchildren Gwen, Ethan and Jackson Luedtke, Cole and Cora Mayne and Kylie Pailing-Rott; four sisters Katherine (Ed) Trace, Mary (Jerry) Sweeney, Jan (Fred) Leuthold and Joan (Jim) Ambler; sister-in-law Pat Jennings. A Public Visitation will be held from 4:00 p.m. until 7:00 p.m. on Tuesday, January 19, 2021 at the GORGEN-McGINLEY & AYERS FUNERAL HOME in Dodgeville, where masks and social distancing is required. A Private Family Mass will be celebrated at St. Barnabas Catholic Church in Mazomanie with burial in St. Barnabas Cemetery. The family would like to thank Crest Ridge Memory Care for their loving care of mom the last two years, especially Carol and Michelle.

The family of Patricia A. "Pat" Pailing created this Life Tributes page to make it easy to share your memories.

Send flowers to the Pailing family.