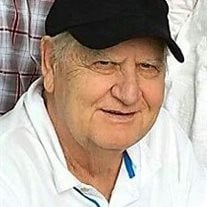 Dodgeville – Owen E. Scullion, age 76, of Dodgeville, passed away on Monday, December 19, 2016 at UW Hospital, Madison with his loving family by his side. Owen was born on May 28, 1940 to his adored parents Ila Verena and Owen John Scullion from Dodgeville, WI. Owen was a strong and courageous man who faced many difficult challenges in his life beyond his 50s, though he met these challenges with a zest for life and a optimistic and jovial heart; his family a strong advocate for his health and happiness. Owen worked as a Produce Manager at the Perkins, Dick's and Countryside Grocery store and had graciously worked at the Bloomfield Manor for the elderly for many years. His biggest joy was spending time with family, playing cards, gardening and adventuring to surrounding little towns to brave various shopping expeditions with his family. Owen was loving, caring, kind, and quiet at times. He had a passion for dancing in his youth and in his former years; a gift handed down to him by his mother and father. Owen's joyful laughter and humor brought cheer and comfort to his family, friends and those around him. He faced life's challenges with an optimism and strength that inspired many that knew him. He provided a warm, loving home to his family that his wife and children will continue to celebrate and rejoice in his memory. On behalf of Owen, his family would like to extend a thank you to the family for the touching donation of their son's heart on May 20, 1999 and to his brave daughter Angie who donated her kidney on October 14, 2004. Owen is survived by his wife Marcie Ann; his children and their spouses; Christine (Dave), Michelle, Angela (Dave), Jennifer (Dawn) and Chad, his grandchildren Justine (Nick), Gentrey, Evan, Carter, his step grandchildren Brennan and Kacie, and his brothers and spouses; Jack (Bonnie), Jerry (Madonna), Ronnie (Judy), and his many nieces and nephews. He was preceded in death by his parents, Owen John and Ila Scullion. Funeral services will be held at 7:00 p.m. on Thursday, December 22, 2016 at the GORGEN-McGINLEY & AYERS FUNERAL HOME in Dodgeville. Friends may call from 4:00 p.m. until time of services on Thursday at the funeral home.

Dodgeville &#8211; Owen E. Scullion, age 76, of Dodgeville, passed away on Monday, December 19, 2016 at UW Hospital, Madison with his loving family by his side. Owen was born on May 28, 1940 to his adored parents Ila Verena and Owen John Scullion... View Obituary & Service Information

The family of Owen E. Scullion created this Life Tributes page to make it easy to share your memories.

Send flowers to the Scullion family.