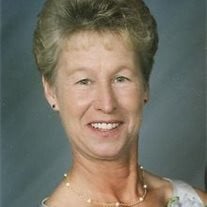 Dodgeville - Nancy Kay Leigh Bonjour, age 61 of Dodgeville passed away after a battle with osteosarcoma on November 1, 2012 at Upland Hills Nursing and Rehabilitation Center. Nancy was born March 3, 1951 in Dodgeville, WI to Delzie and Virginia (Godfrey) Leigh. She graduated from Mineral Point High School in 1969. She married Robert Bonjour in July 1968. Nancy lived in Blanchardville, WI when first married and moved to Argyle in 1976. Nancy worked at Trumphy Cheese in Blanchardville; she then did in-home daycare for many years. Robert and Nancy also owned and operated the Pig Pen Restaurant in Argyle. In 1986, Robert and Nancy divorced and Nancy and her daughters moved to Atlanta, GA where she operated Brandywine Downs restaurant across from the famous Fox Theater. In 1995, Nancy moved back to Wisconsin to see the birth of her first grandchild. She met Curt Edwards in 1996 and the two had resided in Dodgeville where Nancy worked in the health care field until her illness. Nancy enjoyed spending time with her family, camping and helping friends around Dodgeville. Nancy will be missed very much by her family and friends. Nancy is survived by her children Tina (Randy) Swingen, Patty (Dale) Emberson, her grandchildren, Courtney and Kyle Emberson, all of Argyle. Special friend Curt Edwards of Dodgeville, Her brothers and sisters Donald (Donna) Leigh, Mineral Point; Raymond (Carol) Leigh, Mt Horeb, Shirley LaDow, Donna (Ron) Hughes, Linda (Brent Wells) McLaughlin, Robert (Amy) Leigh, all of Mineral Point, John (Cathy) Leigh, Argyle, Paul (Sue) Leigh, Rewey, and many nieces and nephews. She is preceded in death by her parents, her brother James Leigh, her brother-in-law Jerry McLaughlin, her niece Dawn Frye, her great niece, Hanna Hawpe and her great nephew Chance Leigh. Funeral services will be held at 11:00 a.m. on Monday, November 5, 2012 at First United Methodist Church in Mineral Point. Burial will be held at Graceland Cemetery. Friends may call from 4 p.m.-8 p.m. on Sunday at the Gorgen Funeral Home in Mineral Point and from 10 a.m. until the time of services on Monday at the church. The family would like to thank Upland Hills, her personal caregivers and all who have given their support during this time of need.

Dodgeville - Nancy Kay Leigh Bonjour, age 61 of Dodgeville passed away after a battle with osteosarcoma on November 1, 2012 at Upland Hills Nursing and Rehabilitation Center. Nancy was born March 3, 1951 in Dodgeville, WI to Delzie and Virginia... View Obituary & Service Information

The family of Nancy Kay Bonjour created this Life Tributes page to make it easy to share your memories.

Send flowers to the Bonjour family.