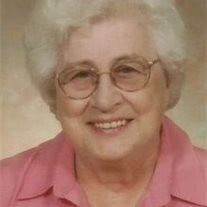 Ridgeway - Monica Ann Scheidegger Weier, age 81, of Ridgeway, passed away on Wednesday, July 23, 2014 at Upland Hills Hospital in Dodgeville. Her sons and daughters were gathered at her bedside as she passed. Monica was born on May 4, 1933 in Dodgeville, WI to James T. and Helen (Blum) Ryan. She grew up on their farm in rural Ridgeway. Monica attended the Weier school and continued her education at Edgewood High School in Madison, where she graduated in 1951. She was married to Ralph Scheidegger of Ridgeway on September 12, 1953 at St. Bridget's Catholic Church. Ralph and Monica raised their children on the Scheidegger Family Farm outside Ridgeway. They were successful farmers and were always involved in a variety of community activities. Monica was involved with the Wakefield 4-H club, Homemakers, and also was a diligent supporter of the Hyde and Iowa County historical societies. She worked as a bookkeeper for a variety of businesses and societies for many years. Ralph had a long association with the Ridgeway Fire Board and township government. After Ralph's passing, Monica stepped in for him and served for several years on the Town Board and the Fire Board. She had a strong interest in genealogy and family history, and was always searching for interesting accounts regarding the Scheidegger and Ryan families. Her involvement in church activities through St. Bridget's was always a comfort to her. Ralph and Monica traveled extensively during their later years, covering much of the United States as well as exploring their roots in Switzerland and Ireland. After Ralph's passing in 1994, Monie eventually married again. She was married to Vincent Weier, another Weier school classmate and childhood friend. They had many good years together before Vince passed away in 2004. Monica is survived by her sisters and brothers, Martha Husom of Ridgeway, Helene (Ron) Gilbertson of Ridgeway, Theresa (Ladd) Puskus of Houston, TX, and Jim (Marlene) Ryan of Barneveld; her children Bob Scheidegger of Dodgeville, Betty Knight of Dodgeville, Carolyn (Mike McDonnell) Scheidegger of Madison, Tom (Glenda) Scheidegger of Ridgeway, Maggie (Tracy) Connor of Witwen, Barbara Scheidegger of Salida, CO, Mike Scheidegger of Ridgeway, Jo Scheidegger of Madison, and Mary (Scott Marsh) Scheidegger of Ithaca, NY. She is further survived by her grandchildren Jessee, Rachel, Ben, Will, Kysa, Macey, Calvin, Katie, Kelly, and Carlyn; also her great-grandchildren Nevaeh, Kyler, James, Atira, and Ellianna. She was preceded in death by her parents, Ralph, Vince, her son-in-law Paul Knight, her grandson Joe Scheidegger, and siblings Raphael, Robert, Vincent, Thaddeus, Benedict, Rosemary, Margaret, and Kathleen. Monica's family would like to thank Dr. Gordon Grieshaber and the staff at Sienna Crest in Dodgeville and Mineral Point for their kind attention during her illness. A Mass of Christian Burial will be celebrated at 11:00 a.m. on Tuesday, July 29, 2014 at ST. BRIDGET'S CATHOLIC CHURCH in Ridgeway. Father Sanctus Ibe will officiate. Burial will be held in St. Bridget's Cemetery. Friends may call from 4:00 p.m. until 8:00 p.m. on Monday at the GORGEN-McGINLEY & AYERS FUNERAL HOME in Dodgeville and from 10:00 a.m. until time of Mass on Tuesday at the church. A parish rosary will be said at 3:30 p.m. on Monday at the funeral home.

Ridgeway - Monica Ann Scheidegger Weier, age 81, of Ridgeway, passed away on Wednesday, July 23, 2014 at Upland Hills Hospital in Dodgeville. Her sons and daughters were gathered at her bedside as she passed. Monica was born on May 4, 1933... View Obituary & Service Information

The family of Monica A. Scheidegger Weier created this Life Tributes page to make it easy to share your memories.