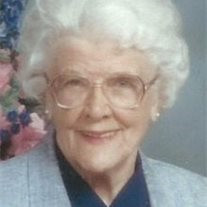 Milwaukee - Mildred Caroline Wolf was born March 10, 1913 in Milwaukee, Wisconsin. She died at The Lutheran Home in Milwaukee on March 13, 2014. Mildred was a resident of Milwaukee her entire life. She grew up on Milwaukee's Southside, at the S. 38th Street location of her family home and family business, the Chas. G. Wolf Trucking Co. In 1943 she enlisted in the US military WAC corps. After her discharge in 1945, Mildred Wolf continued on as a member of the US Army Reserves until 1953; she retired at the rank of Sergeant. She was very proud of her years of service for her country. Upon discharge, she became employed by the United States Government Veterans Administration at their regional office in Milwaukee. She was a woman ahead of her times and rose from entry level typist to the position of Loan and Guaranty Officer. After 35 years of service, she retired in 1978. Being a bit of an adventurer, Mildred traveled extensively throughout the US, Europe, and other foreign ports. After her retirement, golf became a favorite activity and she achieved an admirable handicap that became a source of pride for her. Mildred gave her support to a variety of charitable organizations. She volunteered her time teaching immigrated Laotians to read English. Prior to her own residency there, she was a loyal volunteer helping the residents of the Lutheran Home. Mildred enjoyed the many years, from 1987 on, that she lived at Harwood Place Retirement Home, Harwood Place Assisted Living and The Lutheran Home. She made many friends and never missed an activity. Never having children of her own Mildred's real joy came from her close relationship with her nieces and nephews, to whom she was lovingly known as "Auntie Moonie". They were all the recipients of her unending love and attention. Never a year passed in which she would not remember their birthdays, attended special events in their lives, or lent them a helping hand. Over the years this same kind of caring was extended to following generations of great and great, great nephews and nieces. Whenever there was a family gathering you would always find "Moonie" with the kids rather than the adults. She could also be found walking the hallways cradling the newest additions to the family in her arms singing "bye lo baby bye lo". Mildred was baptized and confirmed at Ebeneser Lutheran Church. All through her life she drew her strength from her Lutheran faith as an active member of Pilgrim Lutheran Church and later Mt. Olive Lutheran Churches. She was preceded in death by her parents Charles and Anna (Elhke) Wolf; three brothers Ralph, Eldor, and Harold, and one sister Audrey Stark. She is survived by her nieces and nephews, their children and grandchildren. Funeral services will be held on Friday, March 21st at 12:00 pm at MOUNT OLIVE LUTHERAN CHURCH, 5327 W. Washington Blvd, Milwaukee, WI. Visitation will be from 11:00am to 12:00pm prior to the service. Interment, with military honors, will follow at 2:00 pm at the Arlington Park Cemetery Chapel, located at 4141 S. 2nd St. in Greenfield, WI. In lieu of flowers, contributions in her name can be made to Mt. Olive Lutheran Church.

Milwaukee - Mildred Caroline Wolf was born March 10, 1913 in Milwaukee, Wisconsin. She died at The Lutheran Home in Milwaukee on March 13, 2014. Mildred was a resident of Milwaukee her entire life. She grew up on Milwaukee's Southside, at... View Obituary & Service Information

The family of Mildred C. Wolf created this Life Tributes page to make it easy to share your memories.

Send flowers to the Wolf family.