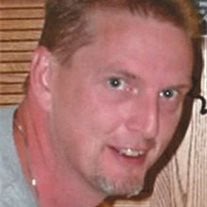 Dodgeville – Michael T. Porteous, age 45, of Dodgeville, passed away unexpectedly on Wednesday, February 5, 2014 at University Hospital in Madison, with his wife and mother-in-law by his side. Mike was born on August 23, 1968 in Illinois to George and Shirley Porteous. He had spent most of his childhood in Illinois and later on moved to Dodgeville, where he had met Julie Hoffman. After spending sometime with her and her children going for walks, riding bikes, playing around at the parks, he decided to make them part of his family. On November 7, 2008, they were united in marriage and on August 2, 2009, their son Caden Michael John Porteous was born. Mike loved to have fun and laugh. He loved to have bonfires and anything to do with being outdoors. One of his favorite things to do was light off fireworks, no matter what time of year and/or what time of day or night it was. If he found some, they were bound to be let off. The most exiting time of year and his favorite holiday was Christmas. He loved spending that family time together and watching his kids open their presents. He enjoyed any times that he had to spend with family, they were everything to him. Mike is survived by his loving wife, Julie Porteous, of Dodgeville; his brothers, Dean Porteous and Doug Porteous; his children, Jessie, Demetris, Preston and Caden; his stepchildren, Taylor Fingerson, McKayla and Kiley Hoffman; his mother-in-law, Cecile Fingerson and father-in-law, John Rolli. Mike was preceded in death by his parents, George and Shirley Porteous. He will be greatly missed by many, but will never be forgotten. We love you Mike (Dad)! Private family services will be held. "The shortest distance between two people is a smile." You are finally free now babe! TLA Julie

Dodgeville &#8211; Michael T. Porteous, age 45, of Dodgeville, passed away unexpectedly on Wednesday, February 5, 2014 at University Hospital in Madison, with his wife and mother-in-law by his side. Mike was born on August 23, 1968 in Illinois... View Obituary & Service Information

The family of Michael T. Porteous created this Life Tributes page to make it easy to share your memories.