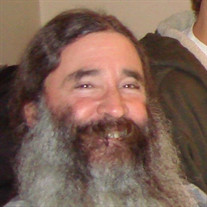 Linden - Michael R. LaRosa, age 64, of Linden passed away suddenly on Sunday, May 19, 2019. Mike was born in South Hempstead, NY on October 14, 1954, the son of Richard and Louise E. (Lisee) LaRosa. He arrived in Wisconsin in 1984. Mike is survived by his wife Susan M. Schmidt of Linden, father Richard, daughters Raffica (Ben Gollmer) and Joan (James Doyle), step-son David (Kait) McCullough, three grandchildren Preston, Danica, and Zoe McCullough, his siblings Theresa, Mary (Stephen) Ostop, Thomas, and Dolores (John) Paeth, and countless friends. He is preceded in death by his mother Louise (Betty). Throughout his life, Mike never met a stranger. He lived a full and interesting life, and had many stories to tell. He could fix anything, and spent his free time inventing and tinkering. As a kid, he built ham radios. His handle was “Troubleshooter,” which suited him well. Later on, he became interested in alternative energy (wind and solar), but may be best known around the neighborhood for the unusual contraptions strapped to his vehicles (gasifiers) that allowed him to drive by burning wood for fuel. Mike made a living as a land surveyor, took pride in his work, and left his mark across southwest Wisconsin. He was a great father who taught his daughters and step-son innumerable practical skills and always encouraged them to follow their dreams. He is forever loved and will be deeply missed. A Celebration of Life will be held on Friday, May 24, 2019 from 4:00 to 7:00 p.m. at GORGEN FUNERAL HOME, 310 Ridge Street, Mineral Point. In lieu of flowers, the family is accepting donations in his memory.

The family of Michael Richard LaRosa created this Life Tributes page to make it easy to share your memories.

Send flowers to the LaRosa family.