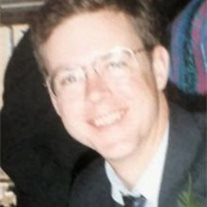 Prineville, OR - Michael Robert Kroll, age 59, died in Prineville, Oregon on Monday, October 26, 2015. Born January 24, 1956 in Dodgeville, Wisconsin to JoAnn and Patrick Kroll, he attended Dodgeville High School and graduated from the University of Wisconsin – Madison with a law degree in 1981. Mike was formerly married to Dona Trester, and they had one child, Camille Kroll. He lived in Chanhassen, MN, and practiced corporate law; also near Gardiner, MT, doing legal consulting and personal investing; and in Henderson, NV, and Prineville, OR, working in real estate law with the federal government. Mike was a private person with considerable intellect and numerous interests. He enjoyed reading great works of literature, as well as about many things natural and philosophical, including the study of Christian and Eastern religions. Mike will be especially remembered for his generosity, affable personality, and his love of the outdoors. At various times in his life, he sailed, hiked, mountain-biked, fished, and rode motorcycles. He was a peaceful person who looked for opportunities to let other people know that they mattered, often offering a kind word even to strangers. He loved animals, especially his dog, Karma. Mike had many good friends. Survivors include his beloved daughter, Camille, Phoenix, AZ; sisters, Lynne Kroll (Steven Linn), Madison, WI; Tracie Barham, San Diego, CA; Angela Reiger (Darin), Manitowoc, WI; and brothers, Dan, Naples, FL; and Kevin (Cynthia), Salem, OR. Michael was a wonderful uncle to his nieces and nephews, and was blessed with loving aunts, uncles, and many cousins. Michael was preceded in death by his mother and father. A Memorial Mass of Christian Burial will be celebrated at 11:00 a.m. on Saturday, November 7, 2015 at ST. JOSEPH'S CATHOLIC CHURCH, 405 S. Dacotah St., Dodgeville, WI 53533. Visitation will be held at the church starting at 10:00 a.m. Inurnment will be at St. Joseph's Cemetery after the funeral mass. The family asks that any memorial contributions be made to a charity of the donor's choice.

The family of Michael R. Kroll created this Life Tributes page to make it easy to share your memories.

Send flowers to the Kroll family.