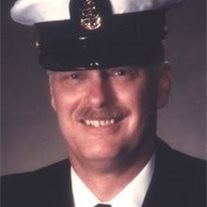 Joy, Illinois - Merl Perrin, age 69, of Joy, Illinois, died Sunday at Clarissa Cook Hospice House. Merlin James was born on January 28, 1946 in Fennimore, Wisconsin to Frank & Lucina (Schaeffer) Perrin. He married Annette McCaulley on December 22, 1966. She preceded him in death on March 16, 1996. He married Julia Crawford on April 16, 1999 in Jamaica. Merl was very proud of his Military service, retiring as a Chief Gunners Mate after 27 years in the United States Navy. He was a member of the Navy SeaBee's, unit ACB1 and a Veteran of Desert Storm. Merl most recently was an over the road truck driver and concealed carry instructor. Previously he had worked with his son at Agricair, LLC in Bancroft, Wisconsin and was also a private pilot. Merl also enjoyed woodworking, gardening and his '61 Corvair. He was a devoted family man, especially with his pride and joy, David. Those left to cherish Merl's memory include his wife, Julia; Children & spouses: James & Julie Perrin of Bancroft, WI; Tania & James Zradicka of Verona, WI; and David Perrin at home; Grandchildren: McCaulley Earley, Gina Earley, Anna Perrin, Jon Perrin, Zach Zradicka, Jessemine Zradicka and Dalton O'Connell; 2 brothers & spouses: David Mark & Naomi Perrin of Dodgeville, WI; Lyle & Janet Perrin of Waukesha, WI; father-in-law: Robert Crawford of Joy, IL and brother-in-law & Family: Jason, Marcela & Quorra Crawford of Joy, IL. He was preceded in death by his parents; first wife, Annette; and his in-laws, Harold & Henrietta McCaulley and Nina Crawford. A Mass of Christian Burial will be celebrated at 11:00 a.m. on Friday, February 27, 2015 at ST. PATRICK'S CATHOLIC CHURCH in Hollandale, WI. Burial will be held in St. Patrick's Cemetery with Military Honors. Friends may call from 10:00 a.m. until time of Mass on Friday at the church. In lieu of flowers, memorials may be made to the Wounded Warriors Project or the Erika Kate Hope Alliance.

The family of Merlin J. Perrin created this Life Tributes page to make it easy to share your memories.

Send flowers to the Perrin family.