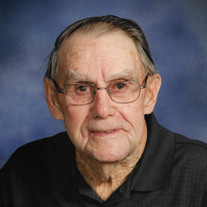 Mineral Point - Merle Elwood U’Ren, age 94, passed away peacefully on October 28, 2020 at Upland Hills Health Nursing and Rehab Center in Dodgeville, WI. Merle was born on February 28, 1926 in Jonesdale, WI as the son of Willie and Myrtle (Harris) U’Ren. Merle married Darlene Betty (Powell) on June 3, 1951 at The First United Methodist Church in Mineral Point, WI. Merle and Darlene were blessed with two daughters, Judy Wroblewski and Jerilyn Owens. Merle and Darlene celebrated 62 years of marriage together before Darlene’s passing in 2013. As a veteran, Merle served our country in the Army in the Korean War from 1951 to 1953. In February 1960 Merle and Darlene purchased the old Humbert farm in Waldwick, WI. Together they farmed for 40 years until they retired in Mineral Point in September 1988. Merle’s hardworking personality was evident as he desired to continue his farming service and began working at Farmers Implement Store in Mineral Point after selling the Waldwick farm. Following 23 years at Farmers Implement, at the age of 85, Merle decided it was time to retire. As a person that greatly appreciates the company of others, Merle found joy in the conversations with coworkers and customers, always valuing the chance to talk farming. Merle is survived by his two daughters Judy Wroblewski (Leon) of Stevens Point, WI and Jerilyn (Scott) Owens of Mineral Point, WI; four grandchildren Ben (Hannah) Wroblewski of Glencoe, MN, Danielle (Don) Rosene of Stevens Point, WI, Erica (Rem) Huxtable of Spring Green, WI, Shelby (Jake) Seman of Dodgeville, WI, and three great grandchildren Tristan (Erica and Rem), Evelyn (Danielle and Don), and Addison (Ben and Hannah). Additionally he is survived by his brother Homer U’Ren, and three sisters-in-law Pat Powell, Francis Powell, and Margaret (Bill) Heins. Merle was preceded in death by his wife Darlene, his parents Willie and Myrtle, his sisters Gwendolyn, Marian, and Alice, and his brother Robert. Merle was a polite, kind, appreciative, and loving man who would consciously put others’ needs before his own. He may not have been the most conversationalist individual at a gathering, but being in the presence of others meant the world to him. After his retirement from farming Merle enjoyed gardening, watching sports, card games, checkers and any time spent with his family. In 2016 Merle had the opportunity to partake in a monumental experience - The Badger Honor Flight. Merle had a strong family-oriented personality. He embraced every visit, gathering, and holiday that would arise in his presence. A private family service will be held and full Military rites will be accorded by the Mineral Point VFW and American Legion at Graceland Cemetery in Mineral Point. A Celebration of Merle's life will be held at a later date.

Mineral Point - Merle Elwood U&#8217;Ren, age 94, passed away peacefully on October 28, 2020 at Upland Hills Health Nursing and Rehab Center in Dodgeville, WI. Merle was born on February 28, 1926 in Jonesdale, WI as the son of Willie and... View Obituary & Service Information

The family of Merle Elwood U'Ren created this Life Tributes page to make it easy to share your memories.

Send flowers to the U'Ren family.