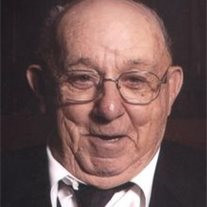 Linden - Melbourne "Mel" Johnston, age 85 of Linden passed away on Friday, March 8, 2013 at St. Mary's Hospital in Madison. Mel was quite a Christmas present for his parents when he was born on December 25th, 1927 in Mifflin, Wisconsin. He is the son of Edward "Ned" Johnston and Anna (Jenkins) Johnston. Mel wed Charlene Schemehorn in 1958 and was a loving father to Melody (Doug) Faull-Linden, Rebecca (Rick) Hoffman-Dodgeville, and Sharon Lindeman-Mineral Point. In addition to his children he is survived by his significant other Sharon Conner-Linden, and her children Dale (Brian) Joyner-Cataract, WI, Jim (April) Conner-Linden and his sister Lillian Williams-Deforest. He is also survived by his grandchildren Michael (Elizabeth) Lindeman-Lakeville MN, Trevor Dailey-Mineral Point, Kayla (Seth) Meuer-Mineral Point, Colin Conner-Linden, and Chantelle Richmond-Dodgeville, 2 great grandchildren Megan and Eric Lindeman, and many nieces, nephews, and friends. Mel lived in Linden for many years. He enlisted in the army in 1952 during the Korean conflict. He was discharged in 1954. He was a lifetime member of the DAV, and a member of the American Legion, and a member of the VFW. He worked at John Deere in Dubuque for over 8 years. He also was owner and operator of the Point Auto Parts and the Salvage Yard in Mineral Point for 2 years. He then worked at the Iowa County Highway Department for over 20 years. He retired in 1991. He was on the Iowa County Fair Board for 15 years. He accomplished what he wanted to before going to meet with his mom and dad and son. First on his list was walking his grandchild Kayla down the aisle to wed Seth. Second was he wanted to go to Washington on the Honor Flight. He did this on September 8th, 2012. Third thing was to go to the Matt Kenseth's museum in Cambridge. He was also a member of the Mineral Point Methodist Church and was on many of the committees for the church for over 20 years. He was also a trustee with the Mifflin Cemetery. He was preceded in death by his father Ned, his mother Anna, an infant son Edward, his sister Doreen, step-son-in-law Walter Lindeman, and a brother-in-law Edwin Williams. Funeral Services will be held on Tuesday, March 12, 2013 at 11:00 a.m. at the FIRST UNITED METHODIST CHURCH in Mineral Point, WI. Pastor Leanne Rose will officiate. Burial will be in the Mifflin Cemetery with Military Rites Accorded by the Mineral Point VFW and American Legion. A visitation will be held on Monday, March 11, 2013 from 4:00 - 8:00 p.m. at the GORGEN FUNERAL HOME in Mineral Point and on Tuesday from 10:00 a.m. until time of service at the church.

Linden - Melbourne "Mel" Johnston, age 85 of Linden passed away on Friday, March 8, 2013 at St. Mary's Hospital in Madison. Mel was quite a Christmas present for his parents when he was born on December 25th, 1927 in Mifflin, Wisconsin. He... View Obituary & Service Information

The family of Melbourne "Mel" Johnston created this Life Tributes page to make it easy to share your memories.

Send flowers to the Johnston family.