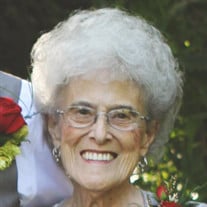 Barneveld - Maxine Stratman, age 82, of Barneveld, WI passed away on Thursday, February 4, 2021 surrounded by love. Maxine was born on May 22, 1938 to Max and Gladys (Olson) Theobald of Adamsville, WI. Maxine fondly recalled stories from growing up with her two brothers. She was married to Robert Stratman on May 3, 1958. Maxine graduated from Barneveld High School in 1955 at age 16 and began working at the family-owned Theobald Café in Barneveld. She was hired at the Barneveld State Bank (now Peoples’ Community Bank) in 1956 as a bookkeeper and was promoted to teller. She transferred to the Ridgeway Branch when it opened and eventually became Branch Manager, Loan Officiant, and the first woman Assistant Vice President of the bank. When the Ridgeway Branch was sold after 23 years, she returned to Barneveld as a Personal Banker. She retired in 2000 and received a Commendation of Service from the Wisconsin State Legislature, then went back to work part-time as a customer service representative. Maxine was a member of the National Association of Bank Women and the Iowa County Bankers Association. She served the Barneveld-Ridgeway area as a banker for over 50 years and joined the 50 Year Club of the Wisconsin Bankers Association in 2007. Maxine served her community in many other ways. She was a member of the Middlebury Methodist Church, where she loved teaching Sunday School, Bible School, and Confirmation Classes. She also served as Sunday School Superintendent and Church Treasurer. Maxine served on the Board of the Memorial Hospital Campaign Fund from 1971-1980 in a variety of administrative positions and was also on the Board of the Ridgeway Salvation Army. Maxine was featured in the 13th (1983-84) and 14th editions (1984-85) of Who’s Who in American Women, and she appeared in the 3rd edition of Personalities of America for Service to the Community. Maxine made numerous lifelong friendships and loved frequently chatting on the phone with many of them. Her daughters have many fond childhood memories. Julie specifically remembers having her mom make handprints on Julie’s sandwiches so she could “taste her hands” because she loved her so much. Jodie was affectionately nicknamed ‘Elmer’ as she stuck to her mom like glue and Maxine also learned to avoid puddles since Jodie loved to splash her. She thoroughly enjoyed attending her grandchildren’s extracurricular events and watching her great-grandchildren grow. Whenever one of her grandkids poked fun at her she’d respond with “Hey George!” instead of guessing which one it was. She always played euchre with her family at Christmas time. She learned all her “tricks” from her father and passed them on to her grandkids. She loved reading novels and watching moonflowers bloom on summer nights. Maxine loved co-hosting the annual Theobald family reunion at the 4th of July for many years, and always made her signature macaroni salad. Maxine is survived by her two daughters, Julie Stratman (Hans) and Jodie (Bill) Mabin; five grandchildren, Justin (Molly) Mabin, Jesse Mabin, Jordan Mabin, Samantha Mabin, and Jevin Mabin; and three great-grandchildren, Addison and Oliver Mabin (Justin), and one on the way (Samantha). She is also survived by her brothers Harvey (Audrey) and Charles (Aletha) Theobald and numerous loved nieces and nephews. The family would like to thank the nurses, doctors, and staff of St. Mary’s Hospital for their care and compassion. Maxine will be laid to rest at the Middlebury Church cemetery near her parents, Max and Gladys, her cousin and neighbor Edward ‘Ted’ Theobald and his wife Anne, and generations of relatives. A Public Visitation will be held at the Middlebury Church on Saturday, February 13, 2021 from 11:00-12:30. In lieu of flowers, the family will accept donations for a Theobald Family memorial bench that may be mailed to the Gorgen-McGinley & Ayers Funeral Home, c/o Maxine Stratman, 400 East Grace Street, Dodgeville, WI 53533. The bench will be placed at the Middlebury Church, where visitors will be able to enjoy the peaceful hillside.

The family of Maxine Stratman created this Life Tributes page to make it easy to share your memories.