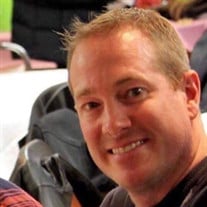 Dodgeville – Matthew A. Miller, age 45, of Dodgeville, WI passed suddenly on Monday, February 7, 2022, at the place he loved most. Matt was raised on his generational family farm in Avoca, WI. He graduated from Highland High School in 1994 and then attended Southwest Technical College, receiving an Associate’s Degree in Accounting. Matt was most recently the Agency Owner for American Family Insurance in Dodgeville and Mineral Point. He met his bride in 1996 at his cousin’s wedding, with an introduction that was more like an interrogation. A few days later, Matt knocked on this girl’s door to find she was missing teeth – a lot of teeth. For some reason he found that 17-year-old toothless girl attractive and he held her on a pedestal from that day forward. They were married on April 15, 2000 (yes – tax day). Children followed and he was, as you’d expect, an amazing dad. Matt was an avid sportsman. He loved all things outdoors. From fishing, hunting, and hiking, to running, cycling the Iowa County roads and pickup games with friends; he was fiercely competitive and would try anything, twice. Matt struggled quietly from anxiety and depression. A special thank you to Tellurian Rehabilitation and Treatment Center, and his care team. Death by suicide is a difficult topic to understand; even with access and support, these challenges proved too difficult for this competitive soul to overcome. If love could have saved him, he would be with us now. Matt is survived by his wife Carrie Anne (Blabaum); his sons Owen Matthew & Cole James, his parents Ann (McCarthy) & Larry Miller, his siblings Dan (Jody) Miller, Jenny (Manny) Correia, Greg (Lora) Miller, and Scott Miller. He is also survived by his mother and father-in-law Patti & Jim Blabaum, his sister-in-law Jamie Blabaum and brother-in-law Carson (Ariel) Blabaum and Carrie’s grandparents, Millie (James) & Beauford Blabaum. He had the best of friends a guy could ask for including, Rob & Renee Aurit, Matt & Tonia Gregg, Pete & Rachel Keith, Carmen & Keegan Koch. He had enough nieces and nephews to confuse a man, Makayla, Derek, Rachel, Brady, Ciara, Taryn, Lucas, Justin, Kaitlyn, Macy, Brandon, Grant, Clinton, Addison, and Arya. We can’t leave out his buddies Dottie, Avis, and Leonard. We would like to thank the Iowa County Sheriff’s department and Highland Fire & EMS for their assistance. In lieu of flowers, memorials can be made to the Suicide Prevention Coalition of Iowa County in support of others seeking help. In the spirit of one of Matt’s favorite sayings, get out there and make some GD memories! A Public Visitation will be held from 4:30 p.m. until 7:00 p.m. on Tuesday, February 15, 2022 at the GORGEN-McGINLEY & AYERS FUNERAL HOME in Dodgeville. Masks are required for your duration inside the funeral home. Private Family Mass will be held at St. Joseph’s Catholic Church.

Dodgeville &#8211; Matthew A. Miller, age 45, of Dodgeville, WI passed suddenly on Monday, February 7, 2022, at the place he loved most. Matt was raised on his generational family farm in Avoca, WI. He graduated from Highland High School in... View Obituary & Service Information

The family of Matthew A. Miller created this Life Tributes page to make it easy to share your memories.