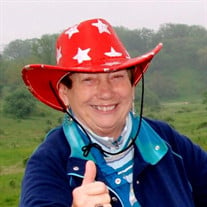 Barneveld – Mary Esther (Matteson) Hathaway, 86 of Barneveld, Wisconsin passed away September 15, 2021. Mary was born on July 18, 1935 in Frankfort, Michigan to Adam and Esther (Johnson) Matteson. As a young girl Mary enjoyed dancing at her father’s dance studio. She got her first horse when she was 12 and that is when her love for animals began. Mary was raised in Michgan until her family relocated to Wisconsin her senior year of High School. Mary met Robert Hathaway in Madison, Wisconsin and married him on January 1, 1954 and spent the next 14 years raising her children in the Madison area. In 1968 Mary fulfilled a lifelong dream of owning a horse farm. Robert and Mary purchased a home in Arena, Wisconsin and she began raising horses. She started with two horses and within a few years had twenty-one horses and she got her first German Shepherd dog. She enjoyed showing horses and living in the country. Mary worked at CUNA Mutual Group until she moved to Arena at which time she worked as the School Secretary at the Arena Elementary for many years. She returned to CUNA Mutual Group in 1979 and worked there until she retired in May of 1993. Robert and Mary enjoyed many years of retirement together, enjoying their horses, their family, playing cards, fantasy football, traveling, and she was an avid reader. She had over 900 books on her tablet and still went to the library to get books. She always encouraged the grandchildren and great grandchildren to read and often bought them books as gifts. Mary is survived by her loving husband of 67 years Robert Hathaway. Her children Ann (Greg) Burreson and Larry (Rhonda) Hathaway. Her grandchildren Josh (Alycia) Hathaway and Lee Hathaway both of Barneveld, Ben (Michele) Burreson of Barneveld, and Nick Burreson (Yenny Mariano) of Dodgeville. Her great grandchildren Evan, Kylee, Blake, Elliot, and Emma Jo Hathaway and Nick Jr and Griffin Burreson. She was preceded in death by her parents Adam and Esther Matteson, her in-laws Lloyd Hathaway and Elizabeth Bruder, and her brothers Bruce and Steve Matteson and a brother in law Eugene Hathaway. A Celebration of Mary’s Life is planned at the BARNEVELD LEGION HALL on Saturday, October 9, 2021 from 1:00 to 4:00.

The family of Mary E. Hathaway created this Life Tributes page to make it easy to share your memories.

Send flowers to the Hathaway family.