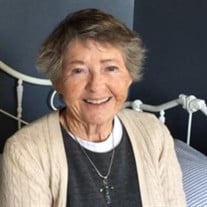 Mary Irene Donka, better known as “Sunny” for her always sunny disposition, passed away peacefully at the age of 94 on Sunday, June 21 in Mineral Point, Wisconsin at home, surrounded by loved ones. Sunny’s definable laugh, smile and kindness brought joy to whomever she encountered and will be missed dearly. Her life well-lived was an incredible story. Born in Durham, England to her biological mother Eleanor Cooper, Mary was placed in a children’s home in 1933, where she was adopted at the age of 7 by her parents Harry and Agnes Dodd. Upon graduating high school, Mary joined the British Army Signal Core, where she became a telephone operator for the duration of World War II. Following the war, Mary traveled to the United States on the Queen Mary in March of 1946, where she eventually met her future husband, Ernest J. Donka. They were married 55 years when Ernie passed in 2002. Together they had four children whom they raised in Aurora, Illinois before retiring to Lake Holiday in Somonauk, Illinois. They always enjoyed a night out dancing and later in life, spending time on the lake with family. Mary loved to garden, cook and sing in the church choir. After Ernie’s death in 2002, she remained near family in Somonauk until 2012, when she moved to Gunnison, Colorado to be near her daughter Candy. In 2017, she then moved to Mineral Point, Wisconsin where she lived with and was cared for by her daughter Cindy and family until she passed. In 2019, we discovered she had a sister Joyce, living in Texas, and a brother George, who died in the 1990’s in England. Due to adoption laws of England she never knew of her birth family. We pray she found peace and joy when reunited with her family, our dad Ernie and her son Robin. Her sunny smile and spunky attitude will be missed and cherished by all her family and many friends. Mary is preceded in death by her husband Ernie, son Robin and her eighteen brother and sister in-laws from the Donka family. She is survived by her children, David, (Cheryl) Donka, Candace, (Dan) Carson and Cynthia, (Steve) Brown. Her eight grandchildren, Jill (Kris Cotton), Kyle Donka, Aaron (Tara) Brown, Eli Brown, Alex (Keaton Carey), Justine Brown, Heather Donka and Chris Donka. Her great grandchildren, Gavin and Mia Cotton, Ryli Brown, Kallie, Jayden, Charley, Sienna Carey, Hudson and Fox Brown.

Mary Irene Donka, better known as &#8220;Sunny&#8221; for her always sunny disposition, passed away peacefully at the age of 94 on Sunday, June 21 in Mineral Point, Wisconsin at home, surrounded by loved ones. Sunny&#8217;s definable laugh,... View Obituary & Service Information

The family of Mary Irene Donka created this Life Tributes page to make it easy to share your memories.

Send flowers to the Donka family.