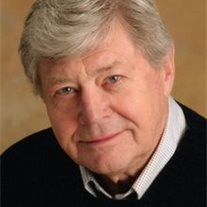 Huiras, Marlyn (Marly) Cletus - For 80 years, Marly Huiras lived a full life as an artist, sportsman, writer, humorist, naturalist, actor, and so much more. He was equally robust as a father. Marly's children are Christopher Huiras, M.D., Julie Huiras Mascitti, Patti LaPorte, Lisa Leuker, and Abby Alexander, all living in Wisconsin. Marly was born on April 24, 1934, near Springfield, Minn., the only child of Phyllis (Gilbertson) Huiras and Cletus Huiras, and died unexpectedly of natural causes on Dec. 29, 2014, at his home near Dodgeville, Wis. He spent his childhood in Sleepy Eye, Minn., and his high school years in St. Cloud, Minn. (Cathedral High, Class of 1952). After playing professional baseball in the New York Yankees farm system, Marly returned to St. Cloud and joined Fandel's Department Store as the visual merchandiser, developing his natural talent as an artist-designer. The Huiras family moved to Madison in 1963 when Marly was named advertising manager for Marshall Erdmann & Associates and began a lifelong career in the field of advertising and public relations. Later he worked as director of creative services at Ray-O-Vac, and, later still, owned The Sun Group Consortium, serving clients with his keen marketing, writing, and graphic design skills. Marly's avocation as an actor with The Madison Theatre Guild during its musical theater heyday was another reason he loved his adopted city. His lead roles in The King & I, South Pacific, and Count Dracula showcased Marly's onstage talents. In retirement, Marly designed, built, and loved his rural home, always a changing canvas, which eventually evolved into a workshop, art studio, and gallery. Its nearby woods and fields were the sites of many family and friends hunting trips, hikes, conservation work, campouts, and the occasional elaborate croquet tournament. Marly's artwork often reflected his lifelong study of Native American culture. He leaves behind a treasured collection of illustrations, beadwork, paintings, and musings written in his distinctive hand. Marly was an avid baseball player, coach, fan, and student of the game. In addition to the Yanks, he played for home talent and rec teams, and donned caps in support of the Sleepy Eye Indians, Minnesota Twins, Milwaukee Brewers, Beloit College Buccaneers, and numerous Little League and high school teams. Marly enthusiastically returned to live in Sleepy Eye in the 1990s, during his parents' final years, and stayed on in his hometown for a time following their deaths. His community involvement with the Sleepy Eye Indians amateur baseball team and local theater led to a state berth and a lavish production of The Music Man. Each of Marly's 14 grandchildren was his favorite. Grandad's talents and abilities are evident in every one of them. His presence at their sporting, school, scout, and arts events was loyal and usually included a "helpful" review of the outcome. His grandchildren are Callie (Travas James and their daughter, Arianna), Kyle, and Hans Huiras; Eric (and wife Amy Baldukas); Evan and Marco Mascitti; Dominick, Elise, and Michael LaPorte; Danielle and Erika Leuker; and Taylor, Jake, and Sophia Alexander. Also surviving Marly are sons-in-law Jason Mascitti, Tom Leuker, and Andy Alexander, who were his fishing and bleacher buddies; daughter-in-law Krista Huiras, and her children Kyle, Chad, and Quin Coleman. Marly and his former wife, Eileen Gilbert (Madison, Wis.), were married for many years and later cordially shared their children's and grandchildren's milestones. Marly is further survived by a troupe of beloved cousins born in Brown County, Minn., including Mavis Davis, Dean Marks, and Dennis Marks; his aunt Birdie Gilbertson of Arkansaw, Wis.; excellent friend Dean Brinkmann and their Sleepy Eye Indians teammates in Sleepy Eye, Minn.; and an abundance of other friends, including those of his children and grandchildren. He also remained close with the extended Gilbert family in Minnesota, especially with Max Gilbert of Backus, Minn. A memorial gathering will be held on Saturday, January 31, 2015, at the Madison Museum of Contemporary Art, 227 State Street, Madison, Wis. Visitation begins at 12:30 p.m. and the service will be held at 2 p.m., followed by a casual reception. A second memorial service will be held next summer (baseball season) in Sleepy Eye (details to be announced later). Our family is grateful to UW Health doctors Lawrence Fleming (ret), David A. Erickson and John P. Heiner and their colleagues; and to Luanne and Steve Greenheck. Memorials may be made to the The Marlyn Huiras Fund (c/o Chris Huiras, N2175 Valley Road; LaCrosse, WI 54601), the Madison Central Library/Bubbler (201 W. Mifflin Street; Madison, WI 53703), or to your favorite hometown library, arts, or historic organization. Our Dad endured disabling pain caused by severe arthritis. We joyfully imagine him now playing catch with his dad and a card game with his mom. Although we always miss him, we know the Huiras family is better for Marly's insight, commanding presence, and great big heart.

The family of Marlyn Cletus Huiras created this Life Tributes page to make it easy to share your memories.

Send flowers to the Huiras family.