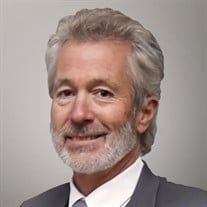 Mineral Point - Mark T. “LeRoy” Greenwood, age 57, of Mineral Point, passed away on September 21, 2020. Mark was born in Madison on March 10, 1963, the son of Lee and Karen (McGettigan) Greenwood. Mark graduated from Mineral Point High School, class of 1981. After high school, Mark went into carpentry and worked as a field superintendent at Bollig Lath & Plaster. He then started his own local construction company, MC Greenwood Company LLC. He married the love of his life Cheryl Wiesen on October 15, 1988 in a small ceremony on the family farm. Farming was his passion. He was the sixth generation owner of Greenwood Farms, and along with his children, it was his pride and joy. He could be found checking fences, and walking the pastures on which the cattle grazed. Because of his hard work and determination, the family farm has stayed in the family for over 170 years. His hobbies were following his children and grandchildren in the livestock show circuits and their sporting events; watching NASCAR races, the Packers, and the Brewers; playing croquet and euchre with the family; and visiting with friends in the garage. Mark is survived by his father Lee; wife Cheryl; daughter Keirsten (Curt) Knutson; daughter Kayla (Eric) Meudt; daughter Kasandra Greenwood; son Kolton Greenwood; grandchildren Ethan, Brady, Emma, Madelyn, Talon, and Garrett; sisters Kris (Dave) McCoy; Kara (Alan) McCarville; many nieces nephews, relatives, and friends. He was preceded in death by his mother Karen, and his in-laws Milton “Kirby” and Madeline Wiesen; his brother-in-law Doug Carley, and sister-in-law Linda Schaaf. A Public Visitation will be held from 12:00 p.m. until 2:30 p.m. on Sunday, September 27, 2020 at the GORGEN-McGINLEY & AYERS FUNERAL HOME in Dodgeville. Due to Wisconsin’s public health mandate, masks are to be worn during the duration of your visit inside of the funeral home and that you practice proper social distancing guidelines. Private Family Services will follow. We will continue to carry his love and four-leaf clovers forever.

The family of Mark T. "LeRoy" Greenwood created this Life Tributes page to make it easy to share your memories.

Send flowers to the Greenwood family.