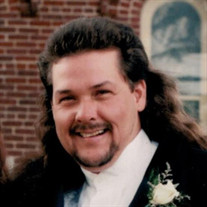 Hollandale – Mark A. Murphy There will be one less traveler journeying the scenic roads between Ridgeway and LaCrosse. A beautiful Harley, a Guardian Angel and Mark Murphy. Oh how he loved those scenic summer rides. Our beloved Mark passed away unexpectedly on Saturday, April 9, 2022. He was the youngest of eight children born to Michael Clarence Murphy and Elizabeth Geraldine McDermott on April 6, 1962. Mark had a successful career at Gasser Construction and enjoyed a camaraderie with his fellow flaggers. When he wasn't working, or riding his Harley, he enjoyed spending time on the farm, cutting firewood, using the skid steer, hunting mushrooms, or simply enjoying its natural beauty, and the abundant wildlife. Mark also enjoyed photography. He would occasionally share his beautiful photos capturing sunrises, sunsets and autumn fog in the valleys. He was proud of his Irish heritage, and it showed in his wit and sense of humor. Mark was kind hearted, thoughtful, caring and generous. He will truly be missed by everyone. Good bye dear Brother and Uncle, may your final journey with the Holy Spirit, who you so often spoke of, lead you to a joyous last ride into the arms of our Dear Lord. Mark Anthony Murphy is survived by three brothers and three sisters, Marilyn (Mike) Murphy Davison, Tom (Dolores) Murphy, Larry Murphy, Ray (MaryClaire) Murphy, Rosemary Murphy and Margy Murphy. He is further survived by twenty-one nieces and nephews, Mike Murphy, Rick Murphy, David Murphy, Shawn Murphy, Robert Murphy, Joe Davison, Sean Davison, Brian Davison, Caroline Evans, Paul Murphy, Colleen Goetz, Alan Murphy, Bill Murphy, Steph Hutchins, Marsha Gonzales, Bridget Halverson, Mollie Murphy, Dan Murphy, Peggy Murphy, Lonnie Johnson and Amber Imbrey. He was preceded in death by his brother Charles Murphy, his sister-in-Law Peggy Murphy, and his parents Clarence and Geraldine Murphy. A Mass of Christian Burial will be celebrated at 11:00 a.m. on Wednesday, April 13, 2022 at ST. PATRICK’S CATHOLIC CHURCH in Hollandale. Burial will be held in St. Patrick’s Cemetery. Friends may call from 9:30 a.m. until 10:50 a.m. on Wednesday at the church. In lieu of flowers, memorials to the family would be appreciated.

Hollandale &#8211; Mark A. Murphy There will be one less traveler journeying the scenic roads between Ridgeway and LaCrosse. A beautiful Harley, a Guardian Angel and Mark Murphy. Oh how he loved those scenic summer rides. Our beloved Mark passed... View Obituary & Service Information

The family of Mark A. Murphy created this Life Tributes page to make it easy to share your memories.

There will be one less traveler...