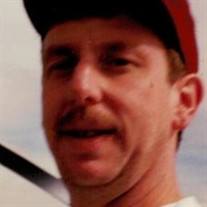 Dodgeville / Ridgeway – Mark A. Dougherty age 56, of Dodgeville, died unexpectedly Wednesday, March 20, 2019 from a massive brain bleed at St. Mary’s Hospital in Madison. He was born on September 10, 1962 in Dodgeville, a son of Jack and Phyllis (Tourdot) Dougherty. He attended River Valley Schools and then went to work on the family farm. Mark owned Jack's Never Inn, a restaurant/tavern in Ridgeway, Wisconsin for 11 years with the help of his companion, Diane O'Neill. After that he assisted Jerry and Jackie Hodgson farming, as well as, Wohl Woodworking in Ridgeway Township. Mark enjoyed his freetime with his friends whether riding his Harley or just visiting at The Wheel in Ridgeway Wisconsin. Mark was a very giving person, which continued after his death. His liver, lungs, kidneys, skin and eyes continue to live, helping others. Mark is survived by his mother, Phyllis Dougherty of Dodgeville; his fiancé Ann Rasmussen; his brothers, FarmerJohn (Richel) and Steve (Darcey); his nephews Jack and Hank Dougherty, Augie Dougherty, Matthew Roco; his nieces Marcella Dougherty, Jamaica, Hanna, Jesha Roco, Phyllis Johna Dougherty. He was preceded in death by his father, Jack Dougherty in 2007. We would like to thank the staff at St. Mary's Hospital and the organ procurement team. A Mass of Christian Burial will be celebrated at 11:00 a.m. on Saturday, March 30, 2019 at ST. BRIDGET’S CATHOLIC CHURCH in Ridgeway. Fr. Stephen C. Petrica will officiate. Friends may call from 4:00 p.m. until 8:00 p.m. on Friday at the GORGEN-McGINLEY & AYERS FUNERAL HOME in Dodgeville and from 10:00 a.m. until time of Mass on Saturday at the church. In lieu of flowers, memorials to the family appreciated.

The family of Mark A. Dougherty created this Life Tributes page to make it easy to share your memories.

Send flowers to the Dougherty family.