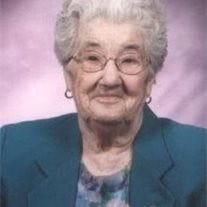 Oregon / Hollandale – Marjorie R. "Marge" Cleary, age 96, of Oregon, formerly of Hollandale, passed away on Saturday, September 1, 2012 at Oregon Manor Nursing Home. She was born on September 1, 1916 in Mineral Point, a daughter of the late William and Katherine (Trace) Reger. She weighed only 4 pounds at birth. Marge had seven brothers and sisters and all have preceded her in death. On October 20, 1936, she married Homer J. Cleary at St. Paul's Catholic Church in Mineral Point. From that union were born six children, Francis "Frank" (June) Cleary, of Florida, Marilyn (Clem) Pittz, of Madison, Betty Dietzman, of Ridgeway, Rose Jorenby, of Madison, Donna (Ronald) Fouts, of Madison and William "Bill" Cleary (deceased). She was preceded in death by her husband, Homer Cleary, her son, William Cleary, her grandson, Chad Cleary, her sons-in-law, William Short, Carlton Jorenby and Palmer Dietzman. She was a member of St. Patrick's Catholic Church and its Altar Society and the Hollandale American Legion Auxiliary. She worked for many years at Gilbertson's Grocery Store in Hollandale. Mom was a hard working lady who enjoyed cooking, baking and family gatherings. No one could have asked for a better mother and grandmother. Her joy in life was her grandkids and great grandkids. Their love for her was so special. A Mass of Christian Burial will be celebrated at 11:00 a.m. on Wednesday, September 5, 2012 at ST. PATRICK'S CATHOLIC CHURCH in Hollandale. Father Thomas Gillespie will officiate. Burial will be held in St. Patrick's Cemetery. Friends may call from 9:00 a.m. until time of Mass on Wednesday at the church. A special thanks to Agrace Hospice Care, Oregon Manor and their caring staff and Father Gary Wankerl. In lieu of flowers, the family suggests that memorials be made to Oregon Manor Nursing Home or Agrace Hospice Care.

Oregon / Hollandale &#8211; Marjorie R. "Marge" Cleary, age 96, of Oregon, formerly of Hollandale, passed away on Saturday, September 1, 2012 at Oregon Manor Nursing Home. She was born on September 1, 1916 in Mineral Point, a daughter of the... View Obituary & Service Information

The family of Marjorie R. "Marge" Cleary created this Life Tributes page to make it easy to share your memories.