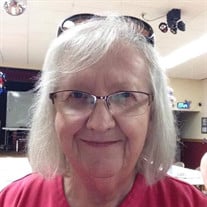 Madison - Marilyn Lee (Reukauf) Roby, passed away after a brief illness on May 25, 2021. Marilyn was born on September 28, 1943, to Ralph and Helen (Weir) Reukauf. When Marilyn was a very young girl, her parents made the loving decision to send her to the Wisconsin School for the Deaf (WSD) where she graduated in 1963. While attending WSD, she met her future husband, Jerry Roby. After living in Chicago for a time, Marilyn and Jerry were married on December 21, 1968. Shortly after marriage, Marilyn and Jerry, moved to Madison, WI. Here they built a life with other deaf friends in the community. Marilyn worked for the Wisconsin Department of Transportation and retired after working over 30 years. Marilyn was an active member of the Madison Association for the Deaf and was the Secretary for the Associations’ board for many years. She was also a member of the ASL Red Hatters. She was also a member of the Silent Lutheran Church for many years. Marilyn loved all animals, especially wild birds with cardinals being her favorite. As a young child, she could always be found in the barn making friends with the new kittens. It was rare that Marilyn did not own a cat or two. While she was small in stature, she had a big heart. She was a kind and generous mother and grandmother who loved her family very much. She will be missed by her family and many friends. Marilyn’s family believes those who preceded her in death, were there to greet her as she entered heaven’s gate. She is preceded in death by her husband, Jerry; daughter, Trish; her father and mother; and her sister, Patricia Wachter. Marilyn is survived by her daughter, Lynn (John) Laufenberg; son, Darrell Roby; grandchildren, Luke and Kaitlyn Laufenberg; her sisters Arvis Martin, Trudy (Terry) Blackbourn, her brother, Terry Reukauf, and her beloved cat, Sam, along with many nieces and nephews and friends. A Memorial Service will be held at 6:00 p.m. on Thursday, June 10, 2021 at the GORGEN-McGINLEY & AYERS FUNERAL HOME in Dodgeville. Friends may call from 4:00 p.m. until 6:00 p.m. on Thursday at the funeral home.

Madison - Marilyn Lee (Reukauf) Roby, passed away after a brief illness on May 25, 2021. Marilyn was born on September 28, 1943, to Ralph and Helen (Weir) Reukauf. When Marilyn was a very young girl, her parents made the loving decision to... View Obituary & Service Information

The family of Marilyn Lee Roby created this Life Tributes page to make it easy to share your memories.

Madison - Marilyn Lee (Reukauf) Roby, passed away after a brief...

Send flowers to the Roby family.