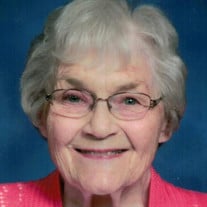 Dodgeville – Marilyn Irene Liddle, age 90 of Dodgeville, passed away on Wednesday, April 6, 2022 at Crestridge Assisted Living in Dodgeville. Marilyn was born April 24, 1931 in Scales Mound, IL, daughter of Homer and Irene (Tippett) Jackson. She graduated from Dubuque Sr High where she met Earl, the love of her life. Earl and Marilyn both attended the University of Dubuque, where she majored in Home Economics. She married Earl Liddle Jr. on February 3, 1952 at St. Luke’s United Methodist Church in Dubuque. They were blessed with three children, Debbie, Gary and David. Over the years they lived in Dubuque, Benton, Scales Mound, and Fennimore before settling in Dodgeville in 1965. Earl worked at the Ward-Brodt Music Store and Marilyn was his secretary. For her last 15 years before retirement, she worked at Lands’ End in Customer Service. Marilyn was very involved in many activities at the Dodgeville United Methodist Church over the years: the church choir, UMW, church circle, bell choir, served funeral lunches and the church dinners. She was especially known for her beautiful whistling abilities. Marilyn is survived by her children, Deborah (James) Short, Gary (Jodi) Liddle and David (Lori) Liddle. She was loved dearly and affectionately known as Gram and GG by her grandchildren and great-grandchildren: Stacey and Eric Bradley (Annabel, Austin, Alana), Melissa and Jeremy Mulder (Mylee, Jase, Jett), Michelle and Boone Tollefson (Madison, Emma, Teegan), Anthony and Allison Liddle (Logan, Avery), Geoffrey and Annie Liddle (Jameson), Ellie and Jake Knutson, Callie and Jeff Thomspon (Liam, Nora, Ezra, Gus), Molly and Kevin Copp (Zoey), Riley and Sierra Liddle (Jaxson). She was preceded in death by her husband Earl, her parents Homer and Irene Jackson, her brother Stanley Colin, her in-laws Marguerite and Earl Liddle Sr, and her brother-in-law Wayne (Jimmy) Liddle and his wife Jean. Funeral services will be held at 11:00 a.m. on Saturday, April 9, 2022 at the UNITED METHODIST CHURCH in Dodgeville. Pastor Jim Droste will officiate. Burial will be held in East Side Cemetery. Friends may call from 9:00 a.m. until 10:50 a.m. on Saturday at the church. A special thanks to her caregivers at Crestridge that meant the world to her. Especially those that would sing, “Daisy, Daisy” with her. Also, a huge thank you to her physicians that kept her going, Dr. Kathryn Dalsing and Dr. Rachel Keith. In lieu of flowers, the family would appreciate memorials to the Dodgeville United Methodist Church.

The family of Marilyn I. Liddle created this Life Tributes page to make it easy to share your memories.

Send flowers to the Liddle family.