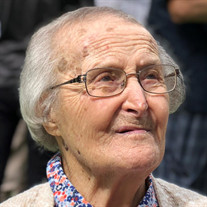 Mineral Point - Madelon Gertrude Willis Sewall Baker of Mineral Point, Wisconsin passed away, age 101, on Wednesday, June 9, 2021. Born September 11, 1919, to Arthur and Mabel Willis of Brockton, Massachusetts, Madelon graduated from Brockton High School in 1937 and attended the University of New Hampshire and Pierce Secretarial School. On April 30, 1944, Madelon married Lieut. Richard Hartwell Sewall, an American dive bomber pilot (Pacific Rim). On August 13, 1945, they welcomed a daughter, Diane. On April 6, 1946, Richard passed away suddenly from complications resulting from his exposure to intense G-forces as a pilot during the war. In 1962, Madelon met Charles F. Baker at the Stetson Shoe Company, where Charlie designed shoes and Madelon worked as an executive secretary. They were married on February 17, 1963, and welcomed sons Phillip and David on February 23, 1964, and January 27, 1967, respectively. (Your math is correct! Madelon was 48 when David was born.) For nearly 50 years, Madelon lived within 20 miles of her birthplace. But in 1967, with much of the shoe industry shuttered in Brockton, Madelon and Charlie picked up stakes. Following Charlie’s career, they lived in Glencoe, IL; St. Louis, MO (briefly); and Geneva, IL. With Charlie’s retirement imminent, they turned their sights to Mineral Point, a beautifully preserved town of Wisconsin. Home to a community of artists and craftspeople, the local artisans and their galleries (think hand-dyed yarns and gorgeous pottery) inspired Madelon to pursue her talents in cooking, weaving, knitting, and gardening. Eventually, she and Charlie moved to a storefront on High Street, the heart of Mineral Point. But Madelon never lost her Boston accent. And whenever she got the chance, for any excuse, she made the cross-country trip back east, usually with Phil or Dave at the helm. When her sons had families of their own, she could persuade a friend to join her for that 21-hour drive. Evidence suggests, they had a great time. In addition to her first husband, Madelon was predeceased by her parents; her sisters Barbara Bemis and Marian Kruse; her nephew, Steven Kruse; and her niece, Gretchen Kruse Call. Madelon is survived by her husband Charlie, 93; her children: Diane Chaisson, Phillip Baker, David Baker, and stepdaughter Charissa Baker; her grandchildren: Nicole Chaisson, Aaron Chaisson, Chelsey M., Joshua E. Baker, Alexander B. Baker, and Matthew C. Baker; and her great-grandchildren: Samuel Gerteis, Charles Gerteis, Julia Chaisson, and Caroline Chaisson; all of whom, along with in-laws and friends, gathered on September 14, 2019, to celebrate and wish Madelon a very happy 100th birthday. Madelon insisted there be no funeral or memorial services in her honor. But she enjoyed the thought that donations in her memory might be directed to Agrace Hospice (agrace.org) or the Shake Rag Alley Center for the Arts, of which she was very fond (shakeragalley.org).

The family of Madelon Baker created this Life Tributes page to make it easy to share your memories.

Send flowers to the Baker family.