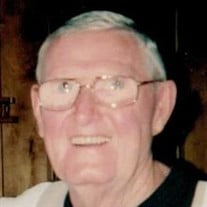 Kenosha / Mineral Point – Louis A. Coogan, age 86, of Kenosha, formerly of Mineral Point, died on Monday, July 29, 2019 Froedert South Hospital in Kenosha. He was born on September 11, 1932 in Willow Springs Township, Mineral Point, the son of John and Nellie (Carey) Coogan. He graduated from Mineral Point High School in 1950, where he was Class President, President of the Student Council and Captain of the Football team. He attended Platteville State College on a football scholarship. He enlisted in the United States Air Force in January of 1952 and served for 4 years. He was trained for top secret crypto and teletype operations. He was discharged as Staff Sergeant and received the National Defense Medal of Honor and Good Conduct Medal. Louie worked at American Motors, owned Coogan’s Bluff tavern and retired doing lawn service. He was very proud of his Military Service. He was a member of the Kenosha Tavern League, Legion of American Veterans and the American Legion of Kenosha. He followed the Packers, Brewers, Cubs and all basketball teams. Louis is survived by his sister Helen of Mineral Point; his niece Mary Walrack; his nephews Robert, Mickey, Denny, Steve, David, Tim, Larry, Stu Coogan and Ron Finnegan; many great and great-great nieces and nephews. He was preceded in death by his parents; his brothers John (Grace), Raymond (Nancy), James (Chick), Larry (Marilyn); his loving companion Fran; his nephews Jim, Martin, Corry, Gerald, Jackie, Pat, Gene; his great niece Ashley Coogan; his brother-in-law Harry Reganti. A Mass of Christian Burial will be celebrated at 11:00 a.m. on Saturday, August 3, 2019 at Ss. MARY & PAUL CATHOLIC CHURCH in Mineral Point. Friends may call from 10:00 a.m. until time of Mass on Saturday at the church. Burial will be held in St. Paul’s Cemetery with Military Graveside Rites accorded by the Mineral Point American Legion. A Celebration of Louie's life will be held in Kenosha on Wednesday, September 11, 2019, where a Memorial Mass will be celebrated at 3:00 p.m. at OUR LADY OF THE HOLY ROSARY CATHOLIC CHURCH, 2224 45th Street, Kenosha, Wisconsin, followed by reception at Cheers, 4619 8th Avenue, Kenosha, WI.

The family of Louis A. Coogan created this Life Tributes page to make it easy to share your memories.

Send flowers to the Coogan family.