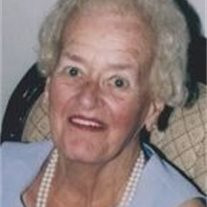 Mineral Point - Lorraine M. Jackson, age 86, of Mineral Point passed away on Tuesday, November 11, 2014 at Bloomfield Healthcare & Rehabilitation with her family by her side. Lorraine was born on May 27, 1928 the daughter of Joseph and Amelia (Siberlich) Yost. She was raised primarily in Milwaukee and attended St. Michael's Elementary Catholic School and graduated from Messmer Catholic High School in 1948. She married Franklin Heaton on September 16, 1950. They had five children together and lived in Milwaukee, Chicago, and Arkansas before moving to Mineral Point in 1962. Frank passed away on July 16, 1976, they were married for 25 years. On June 5, 1978 she married George Jackson and they were married 22 years before George passed away on March 10, 2000. She worked many jobs over her years. She retired from Memorial Hospital (Upland Hills Health) in 1990, she also worked part-time at the Bargain Nook in Mineral Point until 2006. She enjoyed doing crafts and camping. Lorraine is survived by her children, Susan (Mark) McGettigan of Mineral Point, Sheila (Paul Brodhead) Wasley of Loxahatchee, FL, Geri Riley of Highland and Larry (Janice) Heaton of Platteville; 13 grandchildren; four step-grandchildren; 14 great-grandchildren; three step-great-grandchildren; two great-great grandchildren; her sister Belle Waggoner of Minnesota; two sisters-in-law Marilyn Swanson of Port Washington and Betty Heaton of Bradenton, FL; many nieces, nephews, relatives and friends. She is preceded in death by her parents, her husbands Frank and George and their parents, a son Joe Heaton in 2008, her grandson Jeremy Helm in 2004, a son-in-law Rueben Riley in 2014, and six brothers-in-law and three sisters-in-law. A Mass of Christian Burial will be held at 10:30 a.m. on Monday, November 17, 2014 at Ss. MARY & PAUL CATHOLIC CHURCH in Mineral Point. Fr. Monte Robinson will officiate. Burial will be in St. Paul's Cemetery. A visitation will be held from 1:00 p.m. until 4:00 p.m. on Sunday, November 16, 2014 at the GORGEN FUNERAL HOME in Mineral Point and from 9:30 a.m. until 10:15 a.m. on Monday at the church. In lieu of flowers, memorial are suggested to the family.

Mineral Point - Lorraine M. Jackson, age 86, of Mineral Point passed away on Tuesday, November 11, 2014 at Bloomfield Healthcare & Rehabilitation with her family by her side. Lorraine was born on May 27, 1928 the daughter of Joseph and Amelia... View Obituary & Service Information

The family of Lorraine M. Jackson created this Life Tributes page to make it easy to share your memories.

Send flowers to the Jackson family.