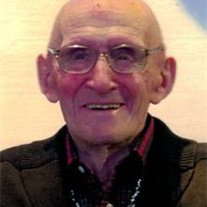 Dodgeville – Lloyd H. Klosterman, age 101 of Dodgeville, passed away on Saturday, May 6, 2017, surrounded by his family at Sienna Meadows in Oregon, WI. Lloyd was born on January 23, 1916 the son of Joseph and Ida (Blazer) Klosterman of Hollandale. He married Dolorous M. Boylen on February 26, 1938 at St. Bridget's Catholic Church in Ridgeway, WI. They were married for 70 years and raised 14 children on a dairy farm in Dodgeville. Lloyd's love was farming, but through the years he was also a cab driver, bar tender and carpenter. After retiring from farming, he mowed lawns for his youngest son's landscaping business until he was 96 years of age. His hobbies included gardening, jigsaw puzzles, dancing and spending time with family. Lloyd is survived by his four sons, Urban (Pat) of Verona, Leo (Karen) of Dodgeville, Robert (Shawn) of Beaver Dam, Mark (Diana) of Dodgeville; five daughters, Dianne (Victor) Philipps of Janesville, Deb (Wes) March of Oregon, Rose (Don) Williams of Waunakee, Marcia Murn of Dodgeville, Jeanne (Ken) O'Brien of Oregon and a son-in-law William Benson of Dubuque; 39 grandchildren, 67 great-grandchildren and 4 great-great grandchildren. He is further survived by his half-sister Idain (Jim) Carter of Blanchardville, and a sister-in-law, Muriel McCarville of Hollandale. Lloyd was preceded in death by his wife Dolorous ("Dorie"), two sons Larry and Paul; three daughters Myrna Palzkill, Sharon Johnson and Theresa Benson; three sons-in-law, Norbert Palzkill, Jerry Johnson and Scott Murn; his parents and step-father Leo McCarville, two sisters Leona Tonkin, Florence Gempler, a half-brother LaVerne McCarville, two brothers-in-law Homer Tonkin and Karl Gempler and a very special aunt and uncle Lil and Marv Klosterman. Lloyd always enjoyed a good joke and appearing in a funny costume. One of his goals in life was to reach 100 years of age and he accomplished that milestone! A Mass of Christian Burial will be celebrated at 11:00 a.m. on Wednesday, May 10, 2017 at ST. JOSEPH'S CATHOLIC CHURCH in Dodgeville. Monsignor Daniel Ganshert will officiate. Burial will be held in St. Joseph's Cemetery. Friends may call from 4:00 p.m. until 8:00 p.m. on Tuesday and from 9:30 a.m. until 10:30 a.m. on Wednesday at the GORGEN-McGINLEY & AYERS FUNERAL HOME in Dodgeville. In lieu of flowers, memorials may be made to St. Joseph's School Trust Fund. The family wishes to thank Main Street Quarters, Sienna Meadows in Oregon and Agrace Hospice for their loving care of Dad for the last 6 years.

Dodgeville &#8211; Lloyd H. Klosterman, age 101 of Dodgeville, passed away on Saturday, May 6, 2017, surrounded by his family at Sienna Meadows in Oregon, WI. Lloyd was born on January 23, 1916 the son of Joseph and Ida (Blazer) Klosterman of... View Obituary & Service Information

The family of Lloyd H. Klosterman created this Life Tributes page to make it easy to share your memories.

Send flowers to the Klosterman family.