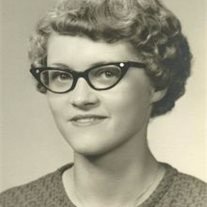 North Freedom / Dodgeville – Linda Lou Rowe, age 66,of North Freedom, formerly of Dodgeville, was guided home by our heavenly father on Saturday, July 12, 2014. Linda died suddenly in a tragic accident while volunteering at the Mid-Continent Railroad Museum in North Freedom, Wisconsin. She was born Linda Lou Starr on August 22, 1947. Linda grew up in the Spring Green valley and Dodgeville area. She attended country schools until the early 1960's. She was a graduate of the Dodgeville High School, Class of 1966. Soon after finishing high school, Linda worked as a supervisor at O'Brien Brothers, a lingerie company in Richland Center, WI. Linda married Virgil Rowe on November 11, 1972. They welcomed their first child, Theresa in 1973, a second child, Jody in 1975 and then their third child, Scotty in 1977. Several years later they settled on a farm in Highland, WI where she and Virgil raised Holsteins on a beautiful Grade A Dairy farm. Linda loved the country life. She often worked with Virgil milking cows, tending the cattle and raising chickens and a large garden. When she wasn't outside working, she was inside canning, baking and cooking. Her favorite past time were baking homemade angel food cakes and cinnamon rolls, skills learned from her mother. She and Virgil left farm life behind in 1987. Shortly thereafter, they relocated to Ridgeway, WI where they resided for many years. In 1996 Linda and Virgil divorced. Linda enrolled at Southwest Wisconsin Technical College from 1996-1998. Following college, Linda worked at Land' End in Reedsburg and later went on to work at Pathway Clinic and the Aging and Disability Resource Center in Baraboo, Wisconsin. Linda fully retired in 2012. Upon learning of her son's tragic and untimely death in 2001, she struggled with many unanswered questions and suffered greatly emotionally. That void in her life made her treasure the presence of family even more. Linda loved her grandchildren dearly and they were her pride and joy. She always left family with a tight hug and an "I love you" and a kiss or two on the cheek. Linda served as a volunteer at the railroad museum since the late 1990's and it quickly overtook her free time. Linda was a woman who was always on the go and never in one place for too long. She was a sensitive, loving and emotional woman. She loved the color red and it made her beautiful blue eyes pop whenever she wore it. Linda started out in the world a shy little girl and left it as a passionate, strong and determined woman. She was full of life, truly living her life until the very end. Linda is survived by her two daughters, Theresa (Scott) Bauer, Jody (Mark) Johnson, her grandchildren, Samantha Johnson, Sadie Johnson and Ezra Bauer, her longtime partner and best fried Skip Lichter, her brother, Thomas Starr(Francis), and her niece, Holly (Bill) Armour and nephew, Shawn Starr and many other relatives and close friends. She was preceded in death by her son, Scott Rowe, her mother, Harrietta (Rabuck) Starr, her father, Emerson Starr. Linda was baptized Lutheran and over the years she served as a member at Grace Lutheran in Dodgeville WI, Peace Lutheran, Cobb, WI and Barneveld Lutheran in Barneveld, WI. She served as a vacation bible teacher while her young family attended Peace Lutheran. A Memorial Service will be held at 7:00 p.m. on Wednesday, July 16, 2014 at ST. JOHN'S LUTHERAN CHURCH, 100 Oak Street in Prairie du Sac, WI. Visitation will be held from 4:00 p.m. until time of services on Wednesday, July 16, 2014 at ST. JOHN'S LUTHERAN CHURCH. The journey to your eternal home is guided with light and love. You, Linda have given so tirelessly of yourself to others your entire life, often times putting others' needs ahead of your own. Those tireless days are but a memory and you will live on forever in the hearts of those who knew and loved you. Your soul will always be a part of ours. God, Lord, let the healing begin. Amen.

The family of Linda Lou Rowe created this Life Tributes page to make it easy to share your memories.

Send flowers to the Rowe family.