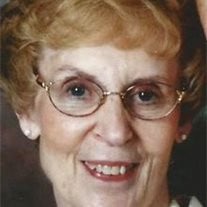 Dodgeville - Leone I. Dalles, age 87, of Dodgeville, passed away on Sunday, December 22, 2013 at Upland Hills Health in Dodgeville. Leone was born in Highland to Herman and Mary Pierick on April 28, 1926. She graduated from Highland High School as class valedictorian in 1944. On January 7, 1946, she and Bob Dalles became husband and wife, made their home in Dodgeville, and raised six children. Leone worked at Smith and Johanning Real Estate and Insurance Company, Potterton-Rule, Inc., and was an executive secretary for Dodgeville Mutual Insurance Company until her retirement at age 67. Her work provided her with challenges and an opportunity to serve others. In 1990 she was given a service award for 6 years of exemplary work as a board member of the Wisconsin Reinsurance Corporation. In 1991 she was honored as Woman of the Year by the Wisconsin Association of Town Mutual Insurance Companies in recognition of faithful years of service to the entire town mutual industry. She was also an active member of St. Joseph's Church. She sang tenor in the parish choir, and for 28 years she and Bob brought the Eucharist to the sick and elderly in private homes and nursing homes. Leone will be remembered as a woman of dignity and uncommon elegance, a woman whose unassuming manner masked strength and constancy. She will be remembered as well for her dedication to her husband and family and her steadfastness in difficult times. Those who knew her well were fortunate to catch glimpses of her child-like humor and playfulness. She sewed wedding dresses for two of her daughters as well as many bridesmaids dresses, helped her husband roof the barn, gave her first grandchild his first bath, won a singing contest in Iowa as a young girl, and waged a fierce battle against raccoons on the farm. Her greatest joys were her family, babies, dancing with Bob, harmonizing with her siblings and her children, and sustaining her connection to St. Joseph's Church. In her last months, Leone never lost her dignity, her patience, her concern for her family, or her trust in God. Leone is survived by her children Marsha (Steve) of Monticello, Mary Pat of Dodgeville, Diane of Dodgeville, Kay (John) of Verona, Kali Ann of Dodgeville, and John (Janilynn) of Fort Wayne, Indiana; 14 grandchildren; 13 great grandchildren; sisters-in-law Trudy Carey and Virginia Dalles; and many nieces, nephews, and cousins. She will also be remembered fondly by special friends Marge DeMuth and Nancy Dentz. She was preceded in death by her husband Bob (April 18, 2008); her parents; her brothers Marian, Virgil, John, Bill, Wilfred, Father Bernard; and her sisters Bernadette and Patricia. A Mass of Christian Burial will be celebrated on Friday, December 27, at 11:00 a.m. at ST. JOSEPH'S CATHOLIC CHURCH, Dodgeville, with Reverend Patrick Wendler and Monsignor Delbert Smelzer officiating. Visitation will be at the church from 9:00 until 10:45 a.m., and a rosary will be said at 8:30 a.m. preceding the visitation. Burial will be in St. Mary's Cemetery in Mineral Point. We wish to express deep appreciation to Linda Schoenmann and Carol Higgins, personal caregivers, for their dedicated and loving attention to Leone's needs. The family is deeply grateful to Dr. Joseph Hansen, Dr. Michele Roelli, Dr. Gordon Grieshaber, Dr. Terrence Norton, Dr. Kent Kramer, and the exceptional staff at Upland Hills Health in Dodgeville. Leone was the beneficiary of great compassion. To express online condolences to the family, please visit www.gorgenfh.com

Dodgeville - Leone I. Dalles, age 87, of Dodgeville, passed away on Sunday, December 22, 2013 at Upland Hills Health in Dodgeville. Leone was born in Highland to Herman and Mary Pierick on April 28, 1926. She graduated from Highland High School... View Obituary & Service Information

The family of Leone I. Dalles created this Life Tributes page to make it easy to share your memories.

Dodgeville - Leone I. Dalles, age 87, of Dodgeville, passed away...

Send flowers to the Dalles family.