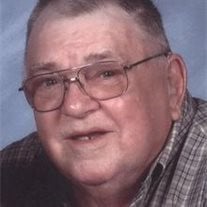 Mineral Point / Prairie du Chien - Leo "Lee" Damien Barrette, age 82 of Mineral Point entered eternal life on January 18, 2013. He was welcomed home by his wife of nearly 60 years, Kathryn A. Barrette (Sherman). Lee was born on November 24, 1930, in Eastman, WI. He attended St. Gabriel's School in Prairie du Chien, WI, until joining the U.S. Navy at age seventeen. Lee served his country aboard the USS Rich, where he and his shipmates fought to maintain a line of defense during the Korean War. Lee married Kathy Sherman on November 10, 1954. They made their home in Mineral Point, WI around 1961. Their union produced eleven children: David, Jeff, Gregg, Mike, Robert, Wendy, Paul, Donald, Mara (Tami), Brenda, and Trish. Lee could fix anything, but was known around Mineral Point for fixing televisions. He had a love of fishing, reading, building airplanes and other mechanical items, donig crossword puzzles, taking long drives, eating ice cream with butterscotch (or caramel) and visiting with family and friends over coffee. Lee was also an avid Morel mushroom "hunter" and in his later years, enjoyed watching birds and squirrels in his back yard. Lee had a smile for everyone and would give the shirt off of his back, even if he had none. He was very proud of his Native American ancestry and gave generously to the Lakota children at St. Joseph's Indian School in Chamberlain, South Dakota. He was very proud of his French Canadian Heritage, as well. Lee loved life, and even though his journey was often a painful one, he always had a smile to share and a joke to tell. Lee was preceded in death by his wife, Kathy; son, Mike and infant son Robert; sisters Rosemary Stephens, Loretta Koecke, Alice Barth and Grace McGill; brothers Don and Robert Barrette; and parents Roland and Emma Barrette (Phillips). He is survived by his children David Barrette of Strausburg, VA; Jeff (Lynn Hopkins) Barrette of Madison, WI; Gregg (Bev Bryant) Barrette of Everett, WA; Wendy (Phil) Norton of Waukon, IA; Paul (Tina) Barrette of Mineral Point, WI; Don (Kathy Frigge) Barrette of Waunakee, WI; Mara (Andrew) Jensen of Madison, WI; Brenda (Mark) Nelson of Darlington, WI; and Trish (Dennis Kron) Barrette of Sun Prairie, WI; his grandchildren Adam, Matt (Jen), and Ashley Barrette; Amanda (Aaron) Cavanaugh, John, Rupert, and Lauren Hopkins; Tatum (TJ) Iverson and Callissa Norton; Jordan, Ethan, and Nolan Barrette; brother Phil; sisters Marie Jenson, Joey Donnahoe and Virginia Powell; and many nieces, nephews and friends. A Mass of Christian Burial will be celebrated at 11:00 a.m. on Monday, January 28, 2013, at Ss. MARY & PAUL CATHOLIC CHURCH in Mineral Point. Fr. Monte Robinson will officiate. Burial will be held in St. Mary's Cemetery. Friends may call 2:00 p.m. until 6:00 p.m. on Sunday, January 27, at the GORGEN FUNERAL HOME in Mineral Point and from 10:00 a.m. to 11:00 a.m. on Monday at the church. Due to allergies, please refrain from using perfumes and colognes.

The family of Leo "Lee" Barrette created this Life Tributes page to make it easy to share your memories.

Send flowers to the Barrette family.