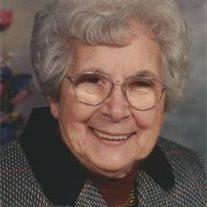 Mineral Point – Lena (Galle) Ceniti, age 103, passed away on Tuesday, June 16, 2015, after a lengthy illness. She was born in Mineral Point on December 20, 1911. Lena was the fifth oldest child of eleven born to Joseph and Mary (Valente') Galle. She attended and graduated from Mineral Point High School. In 1934, she married Rocco Ceniti, Sr. and four children were born to this union. Rocco Ceniti, Jr. (Florence), of Verona, Joseph Ceniti, of Mineral Point, Catherine (Kay) Ceniti, who died at the age of eighteen in 1962 and Frank Ceniti (Mary), of Mineral Point. Lena was a hardworking, stay at home wife and mother. She enjoyed gardening, canning, baking bread, trying new recipes and cooking Italian meals on Sundays. Lena enjoyed watching TV, especially her "soap operas" and the "Food Network". She was also an avid reader until her sight diminished. She was a member of St. Mary's – St. Paul's Catholic Parish. Besides her three sons, she is survived by her grandsons, Colonel David Ceniti, of Roseville, CA, Chris (Carol) Ceniti, of Madison; her granddaughters, Jolena Ceniti-Siegenthaler (Dean), of Mineral Point and Krista Ceniti-Hinson (Josh), of Middleton; her great grandchildren, Ross and Maddie Siegenthaler, Jason Ceniti and Tatum Hinson; her sister, Josephine Galle; her brother, Bruno J. Galle, as well as many nieces and nephews. Lena was a loving and caring mother, grandmother, great grandmother and aunt. She took great pride in each child's talent and accomplishments. A Mass of Christian Burial will be celebrated at 11:00 a.m. on Friday, June 19, 2015 at Ss. MARY & PAUL CATHOLIC CHURCH in Mineral Point. Father Monte Robinson will officiate. Burial will be held in St. Paul's Cemetery. Friends may call from 4:30 p.m. until 8:00 p.m. on Thursday at the GORGEN FUNERAL HOME in Mineral Point and from 10:00 a.m. until time of Mass on Friday at the church.

The family of Lena Ceniti created this Life Tributes page to make it easy to share your memories.