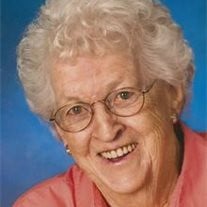 Mineral Point - Lela M. Jacobson, age 97, of Mineral Point passed away peacefully on Thursday, December 26, 2013 at the Mineral Point Care Center. She was born on the family farm in Waldwick on May 13, 1916, the daughter of A. Lea and Mabelle (Everson) Gordon. She attended the Waldwick and Mineral Point schools. She was crowned the South West Wisconsin Charleston Dance Queen at the age of 15. She married Glenn V. Jacobson on August 31, 1932 in Galena. They farmed in Waldwick, and on the Jacobson Homestead in Argyle, and later moved to Mineral Point. She worked at General Hospital in Dodgeville as a Food Service Supervisor, and also worked at the Walker House and was known as chief pasty chef, using her own secret recipe. She also worked as a Pendarvis Tour Guide. She enjoyed crocheting, fishing, music, bird watching, cooking, gardening and canning. She was an avid reader and great supporter of the Mineral Point Library. Lela loved spending time with her family and friends around the kitchen table. She was a member of the First United Methodist Church for over 50 years, where she was a member of the Mary Circle, Methodist Youth Fellowship, and was active in many other church activities. Lela is survived by her children; Rodger (Leone) Jacobson of Hazel Green, Donald Jacobson of Mineral Point, Judith Filardo of Mineral Point, Jerry (Kim) Jacobson of Midvale, UT, Linda (Jeremy) Meek of Mineral Point, and Keith (Laura Reynolds) Jacobson of Berthoud, CO; 17 grandchildren, 22 great-grandchildren, 8 great-great-grandchildren; and many extended family, a sister Alice Noble of Mineral Point, 3 sister-in-laws Lenore Gordon of Dodgeville, Violette Tessendorf of Warren, IL, and Jeanette Gordon of Daleyville, many nieces, nephews, relatives, and friends. She is preceded in death by her parents, her husband Glenn, and a daughter Maxine, 4 sisters, 2 brothers, and several in-laws. Funeral Services will be held on Sunday, December 29, 2013 at 2:00 p.m. at the FIRST UNITED METHODIST CHURCH in Mineral Point. Pastor Becky Henke will officiate. A burial of her ashes will be in the Waldwick Cemetery at a later date. A visitation will be held on Sunday from 12:00 until 2:00 p.m. at the church. A special Thank You for the Love and Care given to Lela goes to the Mineral Point Care Center and Doctor Grieshaber.

Mineral Point - Lela M. Jacobson, age 97, of Mineral Point passed away peacefully on Thursday, December 26, 2013 at the Mineral Point Care Center. She was born on the family farm in Waldwick on May 13, 1916, the daughter of A. Lea and Mabelle... View Obituary & Service Information

The family of Lela M. Jacobson created this Life Tributes page to make it easy to share your memories.

Send flowers to the Jacobson family.