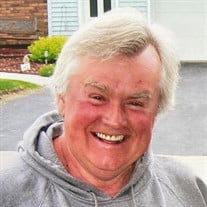 Hollandale – Larry Murphy was taken home by the good Lord on Saturday, May 7, 2022. He was born August 20, 1943 and raised on a dairy farm near Hollandale. He attended St. Joseph's Grade School and graduated from Hollandale High School. After graduation he attended UW-Platteville where he obtained a BA in English, Journalism and Secondary Education, and later earned his Master's degree. He would go on to become a published author of his book "Paddy". Larry enjoyed a fulfilling career spent entirely at Darlington High School, forming lifelong friendships with his fellow faculty members. He truly enjoyed teaching, and his students. How many times we would hear "Oh you know Mr. Murphy? He was my favorite teacher!" Larry also taught Confirmation classes for many years. It was important to him to instruct the youth about their faith, and to lead them closer to the Lord. Larry was a humble and devout Catholic, and his faith was paramount to who he was. Farming was always a part of Larry's life. He and his brother Tom spent many years working together side by side on their adjoining farms. The natural beauty, and abundant wildlife of his farm brought peace and contentment to his life. When not teaching or farming, Larry took time to travel. He was proud of his Irish heritage. His trips to Ireland with family, and later with his fellow adventure seeker and good friend Larry Glass were especially memorable. Larry was always ready for a family game of cards, and patiently taught younger generations how to play and enjoy a spirited game of Euchre or Poker. Larry was very close to his family. He was a constant for his siblings, nieces and nephews. Larry was kind hearted, thoughtful, caring and generous. He will truly be missed by everyone. Goodbye dear Brother and Uncle. Lawrence Michael Murphy is survived by two brothers and three sisters, Marilyn (Mike) Murphy Davison, Tom (Dolores) Murphy, Ray (MaryClaire) Murphy, Rosemary Murphy and Margy Murphy. He is further survived by twenty-one nieces and nephews, Mike Murphy, Rick Murphy, David Murphy, Shawn Murphy, Robert Murphy, Joe Davison, Sean Davison, Brian Davison, Caroline Evans, Paul Murphy, Colleen Goetz, Alan Murphy, Bill Murphy, Steph Hutchins, Marsha Gonzales, Bridget Halverson, Mollie Murphy, Dan Murphy, Peggy Murphy, Lonnie Johnson and Amber Imbrey. He was preceded in death by his brothers Mark and Charles Murphy, his sister-in-Law Peggy Murphy and his parents Clarence and Geraldine Murphy. A Mass of Christian Burial will be celebrated at 11:30 a.m. on Friday, May 13 2022 at ST. PATRICK’S CATHOLIC CHURCH in Hollandale. Per Larry’s request, there will be no visitation. Burial will be held in St. Patrick’s Cemetery.

Hollandale &#8211; Larry Murphy was taken home by the good Lord on Saturday, May 7, 2022. He was born August 20, 1943 and raised on a dairy farm near Hollandale. He attended St. Joseph's Grade School and graduated from Hollandale High School.... View Obituary & Service Information

The family of Lawrence M. "Larry" Murphy created this Life Tributes page to make it easy to share your memories.

Hollandale – Larry Murphy was taken home by the good Lord on...