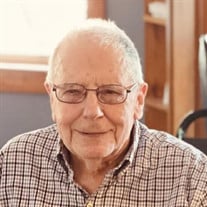 Mineral Point - Lawrence (Larry) Eugene Argall, 88, passed away peacefully at his home in Mineral Point on May 24, 2022.  Larry was born in Marengo, IL, on January 13, 1934, the second of four children, to Homer and Lillian (Stoner) Argall.  His family returned to Wisconsin in 1936. Larry attended Mineral Point High School, where he was junior class president and prom king, before graduating in 1951.   On January 30, 1954, Larry married the love of his life, Mary Faith Palzkill, in the rectory of St. Mary’s Catholic Church in Mineral Point. The couple initially ran the Argall family farm near Mifflin and then lived in Oconomowoc, Beloit, and New Diggings before moving back to the Mineral Point area in 1964.  After being a dairy farmer for most of his life, Larry successfully operated Argall Dairy Supply from 1970 – 1986.  He then worked at the Mineral Point Care Center until his retirement in 1997.  After that, he worked part-time and volunteered at the Hodan Center.  Larry’s life centered on his family, faith, hard work and supporting his community.  He volunteered countless hours for various local organizations.  He was a Mineral Point city alderman from 1984 – 1996 and was President of the City Council.  He was also zoning commissioner at one time and served on the Iowa County Fair Board of Directors from 1974 – 1996.  He was a very active member of St. Mary’s / St. Paul’s Parish, including serving on the Parish Council multiple times and being a Eucharistic Minister.  He was also a member of the Knights of Columbus.  Larry and Mary Faith were long-time 4-H leaders and supporters of Mineral Point High School athletic teams.  They were very proud to be one of the earliest inductees into the Mineral Point Wrestling Hall of Fame and Grand Marshals of the 2001 Mineral Point Fourth of July parade.  Larry was also honored to be named the Mineral Point American Legion’s Citizen of the Year in 1996. Larry enjoyed traveling, camping, and spending time at the hunting cabin, but his greatest enjoyment came from being with his family, relatives, and friends (especially the Monday night and Red Rooster morning groups).  Larry was a calm, humble, hard-working, and handy man who was always willing to help those in need.  He is survived by his loving wife, Mary Faith; nine children, Brad Argall, Steve (Carolyn) Argall, Lori (Tony) Pittz, Kelly (Steve) Haried, Todd (Mary) Argall, Scott (Jen) Argall, Sue Winter, Beth (Mike) Hildreth and Neil (Traci) Argall; 22 grandchildren; 21 great grandchildren (with another on the way); brother, Wayne (Linda) Argall; brother-in-law, Paul (Marge) Palzkill; sisters-in-law, Josephine Van Swol and Jane (Russ) Tonelli; and many cousins, nieces and nephews. Larry was preceded in death by his parents, Homer and Lillian Argall; father and mother-in-law, Bernard and Rose Palzkill; sisters, Marilyn Schmitz and Marlene Schmitz; sisters-in-law, Marilyn Argall and Bonnie Palzkill; brothers-in-law, Bernie Schmitz, Joe Schmitz and Don Van Swol; niece, Kathy Argall; and nephews, Dennis Schmitz and Gary Palzkill. The family would like to especially thank Dr. Dunn, Fr. Michael, and the wonderful staff at Agrace Hospice for all of their care and support. The family encourages everyone to attend a celebration of Larry’s life at Tony’s Tap in Mineral Point at 4:00 on Friday, May 27.  A Private Funeral will be held at Ss. Mary and Paul Parish at 2:00 PM. Burial will be in St. Mary's Cemetery. In lieu of flowers, memorials given to the family will be used to help support charitable organizations close to Larry’s heart. While Larry will be deeply missed by everyone who loved him, his kind and giving spirit will forever live on in all of us.

Mineral Point - Lawrence (Larry) Eugene Argall, 88, passed away peacefully at his home in Mineral Point on May 24, 2022.  Larry was born in Marengo, IL, on January 13, 1934, the second of four children, to Homer and Lillian (Stoner) Argall.... View Obituary & Service Information

The family of Lawrence E. "Larry" Argall created this Life Tributes page to make it easy to share your memories.

Send flowers to the Argall family.