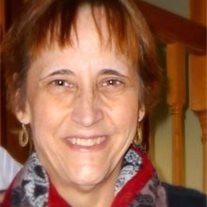 Arena – Laurie M. Ziebarth, age 55, of Arena, died on Thursday, February 6, 2014 at her home. She was born on August 29, 1958 in Dodgeville, a daughter of W. Elliott and Jean (Paynter) Brown. She graduated from Dodgeville High School in 1976 and also from U.W. – Madison. On June 23, 1979, she married David Ziebarth at the Plymouth Congregational United Church of Christ in Dodgeville. Laurie worked as Clerk for the Town of Arena for many years and also at Lands' End for over 25 years. She was an active member and elder of Life Church in Mt. Horeb. She loved playing the piano and taught it to many. Laurie had a deep devotion to Christ and was a living example to many people of her faith. Laurie is survived by her husband, David; her children, Sarah (Daren) Mindham, of Fishers, IN, Erin Ziebarth, of Middleton, Nathan (Jessica) Ziebarth, of Milwaukee and Isaac Ziebarth, at home; her grandchildren, Robert David and Jonah Henry; her mother, Jean Brown, of Dodgeville; her siblings, Julie Gray, Barbara Brown, Mark (Becky) Brown and Todd (Megan) Brown; her father and mother-in-law, LeRoy and Shirley Ziebarth; many other relatives and friends. She was preceded in death by her father, Elliott and brother-in-law, Mike Gray. Visitation will be held from 2:00 p.m. until 5:00 p.m. on Sunday, February 9, 2014 at the GORGEN-McGINLEY & AYERS FUNERAL HOME in Dodgeville. Private Family Service to celebrate Laurie's life will be held. In lieu of flowers, the family suggests that memorials be made to Life Church, Samaritan's Purse or the Salvation Army.

Arena &#8211; Laurie M. Ziebarth, age 55, of Arena, died on Thursday, February 6, 2014 at her home. She was born on August 29, 1958 in Dodgeville, a daughter of W. Elliott and Jean (Paynter) Brown. She graduated from Dodgeville High School... View Obituary & Service Information

The family of Laurie M. Ziebarth created this Life Tributes page to make it easy to share your memories.

Send flowers to the Ziebarth family.