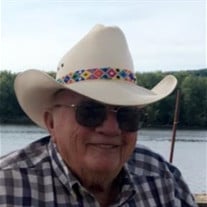 Dodgeville – Laurence D. "Skip" Cloutier, age 88, of Dodgeville, left this crazy world on Wednesday, February 9, 2022 after a brief, non-Covid related illness. Skippy was born on March 16, 1933 to Laurence W and Ida J (Carlson) Cloutier in Superior, WI. His humble beginnings in Superior were hard spent, the early death of his father left him to help his mom raise his little sister Jeanynne. He spent 4 years in the U.S. Navy during the Korean War as a parachute repairman. Skip had a passion for the outdoors that led him to spend the majority of his life in a career with the Wisconsin Department of Natural Resources as a Game Warden. When he retired from the DNR in the late 80's he and Franny purchased a camper and hit the road. They traveled the country for many years before they settled down and split their time between Donna, TX and Superior. When they gave up the nomad life they put down loose roots in Dodgeville. Skip had more hobbies that you could shake a (walking) stick at, they included photography, whittling, beading, painting just to name a few. Doting over his grandkids was one of his greatest joys. Skip was a lover of life who never missed a chance to laugh or tell a good story. You could spot him anywhere by looking for the man with the cowboy hat. He was a generous, loving and very kind man who treated everyone like family. Skippy is survived by his loving wife Franny; his children Scott (Margo) Cloutier of Fernley, NV, Christy (Jerry) Kelley of Dodgeville, Cathy (Dale) Elsbernd of Decorah, IA, Tom Cloutier of Dodgeville and Joe (Patty) Cloutier of Blanchardville, WI; his grandchildren Lacee, Brittany (James), Melinda (Alan), Shayla, Lindsay (Zach), Spencer (Morgan), Nikki (Matt), Jena and John; several great-grandchildren and great-great-grandchildren; his brothers-in-law Joe (Sandy) Gucinski and Gerald (Delois) Gucinski and many special nieces and nephews. Skippy is preceded in death by his parents, in-laws Stanley and Anna Gucinski, his sister Jeannyne Olson, his daughter-in-law Connie Cloutier, his brother and sister in-law Marty and Judy Gucinski, as well as several beloved nieces and nephews. Skippy will be dearly missed by all who knew him, All things must come to an end...IT'S IN THE BOOK!! Private family services will be held. A Public Celebration of Life will held at a later date.

The family of Laurence D. "Skip" Cloutier created this Life Tributes page to make it easy to share your memories.

Send flowers to the Cloutier family.