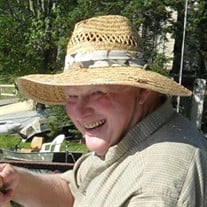 Mineral Point - Larry F. Weitzel, 70, of Mineral Point died peacefully on Tuesday, July 17, 2018 at St. Mary's Hospital in Madison. He was born on January 23, 1948 to Francis and Marien (Roudebush) Weitzel. He graduated from Mineral Point High School in 1966. Following high school, Larry worked road construction for many years including at Iverson Construction. He then worked in maintenance at Upland Hills Health Hospital until his retirement. He was a member of Ss. Mary & Paul Catholic Church in Mineral Point. He married Sandy Doan on October 17, 1981 and they had one son, Kyle. Larry was a very active member of the Mineral Point Fire Department for most of his life. In 2005 he was awarded the Outstanding Citizen of the Year by the Mineral Point American Legion. Larry enjoyed NASCAR races, spending time with family and friends especially his grandkids. Larry is survived by his wife Sandy and son Kyle (Christy), both of Mineral Point; 3 special grandchildren, Maverick, Natalie and Paislee Weitzel; a sister-in-law Jean Weitzel: nieces and nephews Mike, Gary, Jim, Steve Weitzel, Laura Knutson, Cathy Shakespeare, Janet Albright and Diane Weitzel and their families. He is also survived by a brother-in-law Greg Doan, and 3 sisters-in-laws Linda (Gary) Griffiths, Judy (Bob) Brassington and Mary Sue (Rod) Radtke and their families. Larry is preceded in death by his parents, two brothers Fritz and Bill and a sister-in-law Charmaine. A Celebration of Larry's Life will be held on Friday, July 20, 2018 from 3:00 until 8:00 p.m. at the Gorgen Funeral Home in Mineral Point.

The family of Larry F. Weitzel created this Life Tributes page to make it easy to share your memories.

Send flowers to the Weitzel family.