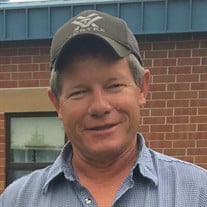 Mineral Point - Larry L. Steffes, age 51 of Mineral Point, Wisconsin, passed away peacefully surrounded by his family on Monday, October 18, 2021. He was born on October 28, 1969, in Dodgeville, WI, the son of Ernest and Donna Mae (Knutson) Steffes. Larry grew up in Mineral Point, graduating from Mineral Point High School in 1987. Farming his entire life, Larry created a family farm that will be passed on for generations. His love for the land can be seen in the amount of time and work he put into it. He served 8 years on the Iowa County Board, and 10 years on the Mineral Point School Board. He wasn't afraid to defend what he believed in even if it went against the majority. He stood up for people's rights and advocated for the youth. Larry was a kind soul who made an impact on everyone he met. His passion was farming, and he took pride in everything he did. His greatest love, however, was his family. He is his kids’ biggest hero and he is their greatest supporter. There was no greater love than the love Larry had for his family, and it shines through in everything his children do. Nothing made him prouder than his kids. Larry made time to talk and get to know everyone. He found a connection with each person he met. Larry took joy in going to auctions, antiquing, and loved taking many family vacations. Larry is survived by his wife Tabitha (Tupper) Steffes; his five children: Martina (21), Larry (20), Emma (17), Claire (14), and Ava (7); his mother Donna Mae (Knutson) Steffes of Mineral Point, WI; his siblings Mary Delaney, Mark (Brenda), Gary (Carol), Joe (Pam), Luke (Jackie), Lisa (Mike) Wagner, Nick, and Eric (Rebecca) all of Mineral Point, WI; his mother-in-law Donna Carey of Mineral Point; his sister-in-law Tonna (Butch) Winkers of New Glarus, WI; his brother-in-law Andy (Amanda) Tupper of Mineral Point; numerous nieces, nephews, cousins, and friends. He is preceded in death by his father Ernest Steffes and nephew Collin Steffes. A Mass of Christian Burial will be held on Saturday, October 23, 2021, at 1:00 p.m. at Ss. MARY & PAUL CATHOLIC CHURCH in Mineral Point. Fr. Michael Tarigopula will officiate. A visitation will be held on Saturday, October 23, 2021, at 9:00 a.m. until the time of service. In lieu of flowers, memorials may be made to the family for Larry’s children.

Mineral Point - Larry L. Steffes, age 51 of Mineral Point, Wisconsin, passed away peacefully surrounded by his family on Monday, October 18, 2021. He was born on October 28, 1969, in Dodgeville, WI, the son of Ernest and Donna Mae (Knutson)... View Obituary & Service Information

The family of Larry L. Steffes created this Life Tributes page to make it easy to share your memories.