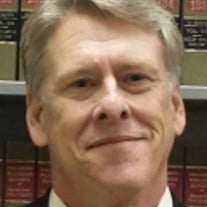 Mineral Point / Dodgeville - Larry Eugene Nelson, age 59, of Mineral Point, formerly of Dodgeville, Iowa County District Attorney, loving husband, father and brother, died unexpectedly on Tuesday, April 16, 2019 at St. Mary’s Hospital in Madison. Larry was born on July 16, 1959 in Dodgeville to Eugene and Eileen (Dochnahl) Nelson. He graduated from Dodgeville High School and then UW-Whitewater in 1982. He later received his law degree in 1988 from the University of Wisconsin-Madison. Upon graduation, he served as Assistant Corporation Counsel for Sheboygan County as well as, Municipal Attorney for Sheboygan Falls and the Village of Kohler. In 1989, Larry began his career in Iowa County. He served as Iowa County Corporation Counsel and Assistant District Attorney from 1989 to 2006. He was appointed District Attorney by Governor Doyle in 2006 and since that time faithfully fulfilled his duties prosecuting all manner of crimes on behalf of the State of Wisconsin. Larry was a champion for justice and a staunch advocate of victims impacted by crime in Iowa County. Larry was decent and fair, he was a true minister of justice, not punishment or of politics. Larry had a huge heart full of so much love and enthusiasm for life. While his first and greatest love was for his children, wife and family, his love for all things “Badgers” was obvious to anyone who knew him. He always had time to talk with you about “the game”, or “the play”. He was proud to be a Badger. As a child, growing up in Dodgeville, Larry was blessed to have friends who remained throughout adulthood. If he could hit it, swing at it, catch it, but not quite dunk it—he loved it. He and his friends enjoyed their youthful playing years for decades. Larry will be sadly missed by his wife Terry (Teresa Dye, nee Cullen); his daughter and hero Peyton Graber-Nelson and his most loved son Cole Nelson. He is also survived by his sisters Lou Ann (Glen) Hocking and Lynn (Tom) Evans of Dodgeville; his mother and father-in-law Tom and Kathryn Cullen of Columbus; his brothers-in-law Michael and Joseph Cullen and his former father-in-law Gilbert Graber. He was preceded in death by his loving parents Eileen and Eugene Nelson and his former mother-in-law Audrey Graber. A Mass of Christian Burial will be celebrated at 11:00 a.m. on Tuesday, April 23, 2019 at ST. JOSEPH’S CATHOLIC CHURCH in Dodgeville. Friends may call from 4:00 p.m. until 8:00 p.m. on Monday and from 9:30 a.m. until 10:30 a.m. on Tuesday at the GORGEN-McGINLEY & AYERS FUNERAL HOME in Dodgeville. The family suggests that memorials be made to the family of Larry Nelson for a future scholarship at Dodgeville High School.

The family of Larry Eugene Nelson created this Life Tributes page to make it easy to share your memories.

Send flowers to the Nelson family.