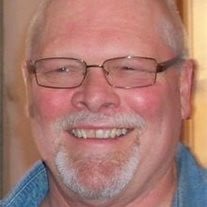 Dodgeville / Milwaukee - Larry L. Lenox, of Dodgeville, WI, formerly of Milwaukee passed away on October 19, 2012 after a brief battle with pancreatic cancer. He died peacefully at his home surrounded by loved ones at age 71. Larry was born on September 4, 1941 in Alliance, Nebraska to Dell W. and Hannah (Louden) Lenox. After high school, Larry attended Chadron State College in Chadron, Nebraska where he graduated with a degree in Recreation. He received his Master's Degree in Parks and Recreation Administration from the University of Illinois at Champaign-Urbana. Following graduation he was hired by the Milwaukee Public School System where he had a long career in Recreation becoming Director in 1989. In 1990 the new superintendent of schools recognized his many talents and abilities and promoted him to Director of School and Community Services overseeing three large departments, where he finished out his career, retiring in September, 2001 after 34 distinguished years. After retiring to Dodgeville, Larry's efforts were concentrated on his country home, taking great pleasure in vegetable gardening and creating a park-like setting on his beautiful 3-1/2 acre property. Larry loved sports of any kind and you could find him during football season rooting for his favorite teams from local high school games to the Badgers and the Green Bay Packers. He loved golf where he joined a league at the local country club. During the last three years of his life, Larry worked at the House on the Rock, a local attraction. He loved nothing more than talking to and guiding all the interesting people touring this unique facility. He also substitute taught at many school districts in the area. His love of young people was so evident and he influenced many young and old, in such positive ways. Larry was preceded in death by his father, Dell and his grandmother Andrea Louden, with whom he had a special relationship. Larry is survived by his wife, Christine (Spanley) Lenox; daughter, Stephanie Hess of Racine, Wisconsin; son, Steven (Carrie) of Winchester, Virginia; daughter, Holly (Jess) Spiegelhoff, of Rhinelander; son John of Madison, Wisconsin; and son Mike (Kary) of Wauwatosa, Wisconsin; his mother Hannah Cherney; sister, Madelyn Robins both of Sullivan; sister Amber (Will Hutchinson) of Laramie, Wyoming. Larry is further survived by nine grandchildren, Thorin (Terri) Ritter, Tyler Ritter and Timber Ritter, Breanna (Mike) Mimms, Macy Lenox, Dylan Spiegelhoff, Elle Spiegelhoff, Kallie Mirasola and Henry Mirasola. Visitation will take place at HIDDEN VALLEY COMMUNITY CHURCH in Dodgeville, Wisconsin on Saturday, October 27, 2012 at 10:00 a.m., followed by a Memorial Service beginning at 11:30 a.m. There will be a luncheon at the church following the service. In lieu of flowers, the family suggests that memorials be made to the National Pancreas Foundation, http://pancreasfoundation.org/take-action/donate-to-the-npf/

Dodgeville / Milwaukee - Larry L. Lenox, of Dodgeville, WI, formerly of Milwaukee passed away on October 19, 2012 after a brief battle with pancreatic cancer. He died peacefully at his home surrounded by loved ones at age 71. Larry was born... View Obituary & Service Information

The family of Larry L. Lenox created this Life Tributes page to make it easy to share your memories.

Send flowers to the Lenox family.