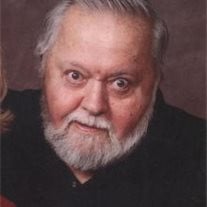 Mineral Point - Larry "Ace" John Bowers, 74 of Mineral Point, passed away peacefully surrounded by his loving family on February 4, 2012 at Upland Hills Health in Dodgeville. Larry was born in Mt. Hope, WI on November 11, 1937 the son of Charles and Gladys (Goodrich) Bowers. Larry was a mechanic at Bublitz Motors in Lancaster for over 25 years. He married Lisa Pederson on December 21, 1988. They raised 2 children Joshua Boelk and April Gander. They enjoyed spending time with their 5 grandchildren Audrie, Olivia, Elliot, Gideon Gander and Kennedy Boelk. Larry is survived by his wife, Lisa Bowers; his son, Joshua Boelk (Lindsey Vogel); his daughter, April (David) Gander all of Mineral Point; 5 grandchildren, his brothers, Frank Grimesey, Chuck (Vickie) Grimesey, and John (Jeri) Bowers; his sisters, Betty (Darrell) Jeidy, Darlene Goodson, Shirley (Ray) Bechen, and Donna (Fred) Kuhlow; other relatives and friends. He was preceded in death by his parents, and brothers Harry and Lloyd Grimesey. A Celebration of Larry's life will be held on Wednesday, February 8, 2012 from 2:00 until 6:00 p.m. at the GORGEN FUNERAL HOME in Mineral Point, followed by a gathering of friends at the Mineral Point Fire Dept. at 6:00 p.m. Burial of cremains will be held at a later date.

The family of Larry J. "Ace" Bowers created this Life Tributes page to make it easy to share your memories.