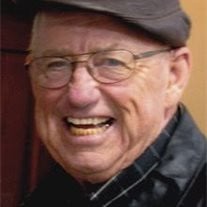 Mineral Point - LaVerne "Curly" Schmitz, a lifelong Mineral Point resident and farmer passed away Monday, January 28, 2013, at the age of 80 at Upland Hills in Dodgeville surrounded by his loving family. He was born on June 4, 1932 on the family farm, son of William and Margaret (Cunningham) Schmitz. During his younger years he enjoyed showing and judging cattle. Adventures included riding in the back of their ton truck keeping an eye on their show cattle as they traveled to Milwaukee or Chicago to the fair. He graduated from Mineral Point High School in 1952, where he enjoyed playing football and being involved in FFA and 4-H. He married Helen Palzkill on June 19, 1954. After marriage he took over the family beef farm carrying on the farming tradition which began in 1877. Together they raised eight children, enjoying life to the fullest. He was named Cattleman of the year in 2002 by the Iowa County Cattlemen's Assoc, and in 2005 they hosted the Iowa County Cattleman's Steak Supper at the farm. In 2012 the farm was recognized as a Century Farm at the Wisconsin State Fair. LaVerne and Helen were members of the Mineral Point Wrestling Club spending countless hours enjoying and supporting not only their sons, but the entire wrestling community. In 1998, Curly and Helen were inducted into the Al Bauman Wrestling Hall of Fame. He was a member of the Knights of Columbus and a member of the St Mary's & St Paul's Catholic Church. After passing the family farm onto his sons, he filled his days playing cards and telling stories with friends and taking trips to Dubuque. Curly is survived by his loving and caring wife of 58 years, Helen; his eight children, Doug (Kris) Schmitz, Dan (Benita) Schmitz, Connie (Bob) Tibbits, Marcia (Greg) Tonkin, Scott (Carol) Schmitz, Mike (Tamara) Schmitz, Todd (Angie) Schmitz, all of Mineral Point and Mark (Jody) Schmitz of McFarland. As well as his twelve grandchildren; Tierney (Brian) Keyes, Torrie (Ryan) and Todd Tibbits, Brooke and Brandon Wilson, Ashley (Justin) and Tyler Tonkin, Samantha and Lucas Schmitz, Boone and Logan Schmitz, and McKenzie Schmitz; and great grandchildren; Aidan and Brennan Keyes, and Olivia Wilson. He is survived by three brothers; John (Mary) Schmitz, Joe (Marlene) Schmitz, Bill (Barb) Schmitz, and one sister Janice Pittz and sisters–in-law; Marian Schmitz, Dorothy (Jim) Dodds, Mary (Merlyn) Nihles, Patricia Bemus, Kay (Fred) Oomens, Myrna Palzkill, brother-in-law Gene Palzkill, and numerous nieces and nephews. LaVerne was preceded in death by his parents, sister Kathleen Nicholson, brothers; Harold, Donald, Bernard, Kenneth, sisters-in-law; Margaret Schmitz, Marilyn Schmitz, Jackie Palzkill, brothers-in-law; Stan Nicholson, Ralph Pittz, Dale Carey, Norbert Palzkill, Robert Stromer and Vic Bemus, and mother-in-law and father-in-law John and Catherine Palzkill. A Mass of Christian Burial will be held on Friday, February 1, 2013 at 11:00 a.m. at Ss. MARY & PAUL CATHOLIC CHURCH in Mineral Point. Fr. Monte Robinson will officiate. Burial will be in St. Mary's Cemetery. A visitation will be held on Thursday, January 31, 2013 from 4:00 – 8:00 p.m. and on Friday from 10:00 – 10:45 a.m. at Ss. MARY & PAUL CATHOLIC CHURCH. He will always be remembered as a loving father and husband, good friend and man who brought laughter and joy to many. He will be sadly missed, but never forgotten. He'll remain in our hearts forever.

Mineral Point - LaVerne "Curly" Schmitz, a lifelong Mineral Point resident and farmer passed away Monday, January 28, 2013, at the age of 80 at Upland Hills in Dodgeville surrounded by his loving family. He was born on June 4, 1932 on the... View Obituary & Service Information

The family of LaVerne "Curly" Schmitz created this Life Tributes page to make it easy to share your memories.

Send flowers to the Schmitz family.