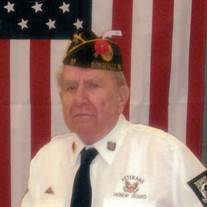 Dodgeville – Keith Bowers, age 86, of Dodgeville, passed away on Monday, December 28, 2020 at the Grant Regional Health Center with his boys by his side. Keith was born on December 4, 1934 in Dodgeville to Melvin and Elinor (Richards) Bowers. He graduated from Montfort High School in 1952. After high school, he went to the service for two years. He was stationed in Germany after the Korean War. Keith then returned home and started selling potato chips. Little did he know, chips would be his job for the next 35 years. He first started working for Red Dot Potato Chips, which was then bought out by Frito Lay. He retired in 1990 from Frito Lay. Keith also owned the old Red Room Bar for nine years. Keith volunteered on the Dodgeville Fire Department for 28 years. He created many special friendships in the department, and enjoyed playing cards. Keith also was very proud to be part of the American Legion. He loved the Veterans programs, walking in the parades, and taking part in the honor’s flight. Many will also remember Keith for his special hobby that truly became his lifetime passion, coin collecting. He would travel daily bank to bank in search of the best coins. Keith's biggest accomplishment was his three boys; Brad, Brian and Mitch. He coached all three in softball, showed them the love of hunting and the outdoors. He also showed them the love of dogs, especially black labs. Keith is survived by his three boys Brad, Brian and Mitch (Tricia Whitford); his eight grandchildren Jess (Eli) Ellison, Andy, Ethan, Kacie (Chris) Rose, Cody, Madison, McKenna and Elin. Keith also has five great grandchildren. Keith is preceded in death by his parents, Melvin and Elinor, an infant brother, his older brother Royce, and his favorite dog Nikki. A Public Visitation will be held from 4:00 p.m. until 6:30 p.m. on Monday, January 4, 2021 at the GORGEN-McGINLEY & AYERS FUNERAL HOME in Dodgeville, where masks and social distancing is required. Private family service will follow. In lieu of flowers, memorial donations to the Dodgeville Fire Department and the Dodgeville American Legion.

Dodgeville &#8211; Keith Bowers, age 86, of Dodgeville, passed away on Monday, December 28, 2020 at the Grant Regional Health Center with his boys by his side. Keith was born on December 4, 1934 in Dodgeville to Melvin and Elinor (Richards)... View Obituary & Service Information

The family of Keith Bowers created this Life Tributes page to make it easy to share your memories.

Send flowers to the Bowers family.