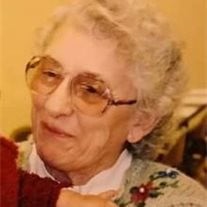 Mineral Point - June Elizabeth Zart, age 85, of Mineral Point passed away Tuesday morning June 6, 2017 at Upland Hills Nursing & Rehab Center in Dodgeville. June was born July 1, 1931, the daughter of William August and Gretta Elizabeth Wolf. She was the youngest of seven children. Growing up on a farm, June had many pets, but her greatest love was horses. June was employed at Dubuque Packing, before marrying Frank Zart on June 28, 1951. They farmed in the Potosi, Stitzer and Rewey areas. In January of 1972, they moved to Mineral Point, where she lived until she became ill. After the farm sale in 1995, June became employed at McDonald's in Dodgeville until April 2004, when she suffered a stroke. June is survived by her children Linda (John) Peters, Barbara (Jerry) Wahl, Carol (Steve) Yoose, Betty Zart, Debra Weber (Charlie Bonjour), Jack (Donna) Zart, Jill Bemis, Lori (Bill) Bowman, Julie Mitchell (Mark McQuire), Sally (Harry) Williams and Mark Zart: 17 grandchildren; 16 great grandchildren; her sister Pauline Chandler; many nieces and nephews; and in-laws Eva Fish, Dorothy Sanger, Bill and Sandy Zart. She was preceded in death of by her husband Frank, a daughter Lisa Zart, her grandson Benjamin Bowman, her sisters and brothers-in-law Gladys and Harry Boyd, Leona and Virgil Matthews, Phyllis and Clyde Fry, Doris and Raymond Burkholder, Virgil Chandler, her brother and sister-in law Charles and Mildred Wolf, her brothers-in-law and sisters-in-law Carl and Rose Zart, Robert and Norma Zart, Walter and Norma Zart, Clarence Fish and Archie Sanger. June will be remembered for all those old tires along the driveway that she would plant with a variety of colorful mums. She would also do samples of different quilt blocks that she would find in her quilting magazines. June also loved making all different kinds of desserts from recipes she would find in the newspaper or magazines. She would get up early on Thanksgiving and Christmas mornings to get the 20+ pound turkey, with lots of stuffing, in the oven before going to the barn to milk cows. She enjoyed going to the church rummage sales where she would buy some very colorful double knit clothing. She would then spend hours cutting them into strips, sewing them together and rolling them into balls and then having them woven into rugs. She will be remembered as a loving caring Mom, Grandma, and Great Grandma. Funeral services will be held at 11:00 a.m. on Saturday, June 10, 2017 at the GORGEN-McGINLEY & AYERS FUNERAL HOME in Dodgeville. Visitation will be held from 9:00 a.m. until time of services on Saturday at the funeral home. Burial will be held in Liberty Ridge Cemetery near Lancaster.

The family of June E. Zart created this Life Tributes page to make it easy to share your memories.

Send flowers to the Zart family.